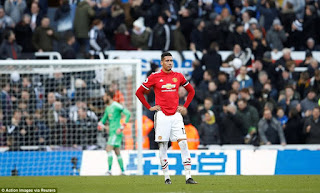 Valentine's Day is a time to spend with loved ones, but those who love Manchester United will still have been dissecting what has gone wrong in the last couple of Premier League away games at Tottenham Hotspur and Newcastle United.

The results is one thing, but the manner of the defeats hurt all the more as Manchester United didn't play anything like how we would have expected.

It means big decisions for the manager ahead of a very important week for Manchester United with an FA Cup Fifth Round tie followed by the resumption of the Champions League and then a big Premier League game against Chelsea next Sunday.

At this stage you would have hoped Mourinho would know the best formation and system for his team, but the signing of Alexis Sanchez in the January transfer window has provided another option for the attack. However the lack of real cohesion in the attacking play at Wembley Stadium and St James' Park has to be a concern for the fans.

Ultimately the choice is going to come down to Mourinho and how he wants to play his team, but I have to say I am stunned that he has not found a way to get the best out of the likes of Paul Pogba who has been at the club for eighteen months.

As much as I have admired Mourinho's work down the years and at Old Trafford, I have to say the time has come where you have to wonder if he can get this team taking the next step in his development. My concern comes out of the fact that he seemingly is not finding a way to get the best out of the best players he has at his disposal and that has to be a negative over his reign.

The best players United have are David De Gea, Pogba and Alexis and the team should be built around them.

One of my more recent criticisms of the United tactics have been the way Anthony Martial has been shifted into an unfamiliar position to accommodate Jesse Lingard.

And the bottom line for me is that Lingard is not good enough to be a Number 10 for any top club, let alone Manchester United.

I don't hate Lingard like some supporters seem to do, but I do recognise what he is. For me he is a player that seems to find a big goal and is in the right place at the right time, which is a positive and not a criticism, but picking a pass and making the right decisions in the final third are not his forte.

A real Number 10 has to be able to do that and Alexis has made it clear that he would prefer that spot in the team so why is Lingard starting in that position?

Play your best players in their best positions! 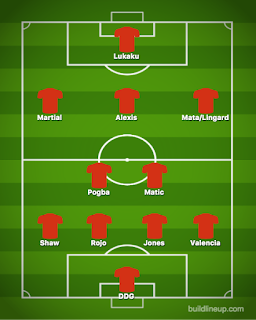 If Jose Mourinho is insisting on sticking with his 4-2-3-1 system, then that is much more like how I would have United line up in Sevilla (assuming Bailly is not fit to play).

I don't think Chris Smalling or Ashley Young are playing well enough to start that game with Luke Shaw and Marcos Rojo (or Bailly) ready to come in and it puts Alexis and Martial into positions where they feel they can contribute their best.

And you want those two to be at their best rather than Lingard who can still play well enough on the problematic right side of the team. If he isn't comfortable, Juan Mata can play that position and I just think it makes United look more effective going forward.

Does that get the best out of Paul Pogba though? Not as far as I am concerned and I think Jose Mourinho has two other options for the game in Sevilla and perhaps even the home League games against Chelsea and Liverpool to come. 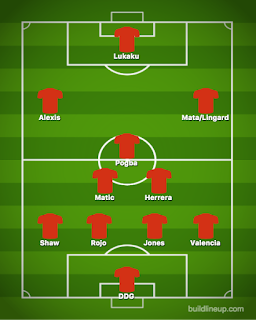 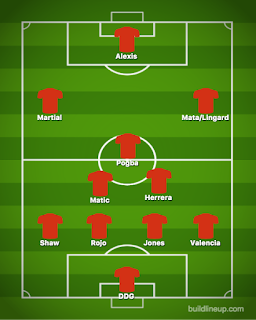 These two teams are essentially the same with minor differences, but both have the three man midfield which can open things up for Pogba to operate much further up the pitch.

Pogba's best performances for both club and country have been in that position where he can turn and run at the defensive players while finding options all around him. His best
game for Manchester United recently came in that position in the 0-2 win at Goodison Park and I have no idea why Jose Mourinho would not want to play the best centre midfielder in a position where he would be most effective.

I love Anthony Martial, but he would have to be sacrificed in this system because he isn't a right winger as far as I can see. However he could be used if Mourinho wants more movement and quality right up top with Alexis replacing Lukaku and then using Martial from the left side.

Having that option would make United very, very dangerous on the counter attack while also having the strong defensive base that Jose Mourinho wants.

I don't mind Lukaku as the focal point either, but Alexis does give you options and is someone who feels more threatening in the middle of the park. Sometimes you have to accommodate that by also keeping Paul Pogba in a strong position and that means making sacrifices.

Mourinho has spent a lot of money on Lukaku so using Alexis in a position on the left where he has thrived since coming to England is feasible to me. I just don't want the rest of the team to be shoehorned into unfamiliar positions and then asked to be very comfortable in big games.

Martial as an impact player is not a bad option off the bench and I prefer that than him starting on the right side where he has never looked his best.

Out of the three options above I would most definitely go with the second and then look to Pogba and Alexis to produce their best. It's also one that can be changed if United need to bring in another attacker in games against 'weaker' teams, but over the next week I would play that formation and personnel against the likes of Sevilla and Chelsea.

It gives Mourinho the strong defensive shape, while also opening things up for the top players in the squad to make the big positive impact we fans are all hoping for.

I am just praying Mourinho does not start the same XI that have played so poorly at Tottenham Hotspur and Newcastle United in the last couple of weeks as that won't inspire confidence.

Instead of dragging Pogba off and giving the critics more to sink their teeth into, I hope the manager can put him in what has clearly been his best position for United and France.

These are big decisions for Mourinho to make, but ultimately they could determine if this season is a success or a real failure with the top four far from secured.
Posted by Dav Aulak at 18:11