Anyone who loves Boxing had to be fascinated by the brilliant fight between Oleksandr Usyk and Mairis Breidis in the opener of the World Boxing Super Series Semi Final bouts to take place over the month.

It was an incredibly close fight and Breidis showed tremendous heart in the middle of the fight when it looked like Usyk was about to take over.

I do think the right boxer progressed to the Cruiserweight Final, but both Murat Gassiev and Yunier Dorticos are going to feel it is a winnable fight against Usky in May. I still think Usyk will go in as the favourite in the Final, but the odds are likely to be much closer than they would have been eight days ago and could be even tighter if the second Semi Final is decided spectacularly.


On Saturday we also have a decent card at the O2 Arena which is headlined by Lawrence Okolie and Isaac Chamberlain in a long standing 'British Beef'. The two Cruiserweight boxers may not be at the level of those competing in the World Boxing Super Series, but the winner will take the next step in his career as they look to get to that level.

With the likes of Usyk, Breidis and Gassiev all perhaps looking up at the Heavyweight Ranks in the near future, there will be a void to fill at the top of the Cruiserweight Ranks and the winner of Okolie versus Chamberlain will feel they can get to that level to do that. 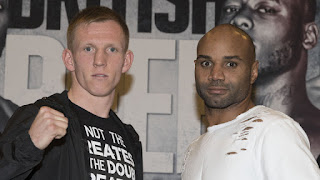 Ted Cheeseman vs Carson Jones
There is a lot of potential in Ted Cheeseman and this is the kind of fight that will determine how quickly he is going to reach what most expect of him.

The 22 year old is in for the toughest test of his career when he comes up against veteran Carson Jones who should be familiar to most British boxing fans.

Jones has stopped Brian Rose on these shores in an upset and also narrowly lost to Kell Brook in their first bout while unbeaten Ben Hall was also stopped by the American. Brook did stop Jones in the second fight and Rose came back to beat Jones on points in their second bout, but there is no doubt that Cheeseman is in for a really tough bout to show where he stands.

It is going to be a learning curve and I think most would expect Jones to cause problems during the fight, although the younger fighter should be able to out-work Jones over the distance.

One issue for Jones is the lack of activity over the last fifteen months since beating Hall with his one fight ending in a Technical Decision in Mexico as Jones was controversially beaten by Antonio Margarito.

How far has Jones slipped in that time? He is saying all the right things and I don't think he is going to be as 'old and slow' as Cheeseman has suggested. There is still some fire burning inside of Jones and he has shown coming over to Britain and being anything but an easy day in the office is something that he clearly enjoys.

I do like Cheeseman though and I think he is going to out work Jones over the distance. There will be some tough moments when Cheeseman will have to show what kind of heart and character he has, but I think he is ready to take the next step in his career with the most notable win on his resume.

Stopping Jones is not easy with only three of his twelve defeats coming in that manner. Backing Cheeseman to win this one on a Decision is the call. 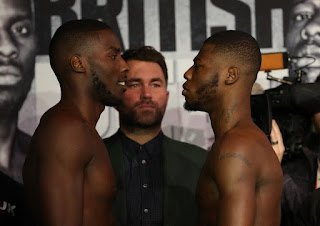 Lawrence Okolie vs Isaac Chamberlain
This has been a fight that has been brewing for a while with two unbeaten British prospects from London clearly wanting to prove they are better than the other.

Both Lawrence Okolie and Isaac Chamberlain will feel this is the biggest test of their professional careers and I think the losing fighter has every chance of coming again. However neither Okolie or Chamberlain are thinking about losing with this much pride on the line and the fighter that deals with the emotions the best is going to come out with the win.

From the outside it does feel like Chamberlain is perhaps the calmer of the two fighters, but I think the situation has not changed.

Okolie has the power and the feeling is he can blow past Chamberlain very early... Failing to do that will likely see the momentum shift to Chamberlain who is arguably the better boxer and could get into a position to take this fight on a Decision or a late stoppage if Okolie begins to get a little tired.

The former Olympian Okolie has to make sure he is not exerting too much energy too early and needs to pick his shots, but it is his power versus the boxing skills of Chamberlain that will be on show here.

I am leaning towards the power proving to be the difference maker- Chamberlain has to try and stay away from Okolie at least early in the fight, but I am not sure that he isn't able to keep himself away from a dust up if he is caught by the power of Okolie.

Chamberlain is still learning his craft and the lack of experience may be an issue if dragged into a fight and I do think Okolie will be willing to take a shot to give a shot in this one. He is very dangerous early in the fight and while there are some questions for both men to answer, I think Okolie can use his power to get this done early.

It will have to be early as Chamberlain's confidence will grow if he can get out of the first three Rounds without being tagged, but Okolie looks like a man who is destined for bigger things. The stories about the way sparring has gone suggests Okolie is very ready for this one and even the confidence of Chamberlain this week is not enough to sway me towards the underdog.

I think a small interest in Okolie getting Chamberlain out here in the first half of the fight is worth taking. 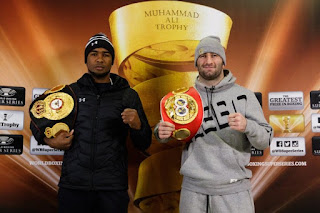 The second World Boxing Super Series Cruiserweight Semi Final promises to be an all out war with both Murat Gassiev and Yunier Dorticos convinced their power makes the difference in this fight.

You can't blame either fighter for that belief with Knock Outs a huge part of their unbeaten resume, but trying to work out which one of these men can stand up to the power of the other is more difficult.

The stand out wins have come from Gassiev, but Dorticos was expected to be exposed some time ago and instead has continued knocking out every one who gets into the ring with him.

Unsurprisingly the layers are expecting another stoppage in this one, although the favourite is Gassiev who has shown the better technique and perhaps even a sturdier chin. He also has the more recognisable wins on the resume, but that takes nothing away from Dorticos who has tremendous power.

While it would be a surprise to see this fight go the distance with the way Dorticos approaches things, I would say that Gassiev is likely to get the better of the bout if it comes down to points. However I think Gassiev is also the more likely to secure the stoppage most people are expecting in this fight simply because of the better technique and the better shot absorbing ability.

That is where I think the home fighter will find the difference and he has the finishing ability to put Dorticos away especially as the Cuban will not be afraid to keep swinging even if he has been hurt.

It really is a fight that could finish at any time, but I like Gassiev to come through. Dorticos has to be respected with the punching power he has demonstrated throughout his career, but his one failure to get a stoppage was against Edison Miranda and I just think that could be telling.

'Iron' Murat Gassiev might be the toughest opponent Dorticos has faced and I like the Russian to come out with a stoppage at some point.