There was one hugely controversial issue in the Premier League this weekend which can't be ignored, while I won't apologise for this being a piece leaning towards Manchester United on what was a successful weekend for the club after the disappointment in Eindhoven. 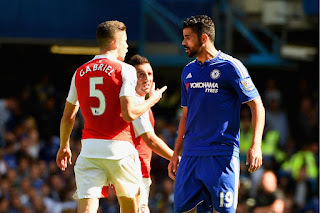 Is there a Bigger Wind-Up Merchant than Diego Costa in the Premier League?
I have no love lost for Arsenal and found it amusing how their fans reacted to Diego Costa's attitude on the field considering how so many of the same fans 'love' Martin Keown and his actions against Ruud Van Nistelrooy ten years ago.

But let's face facts- I have said for a year that there are very few bigger wind up merchants in the Premier League than Diego Costa.

He is constantly playing on the edge when it comes to the rules, but how he seems to get away with his over aggressive approach is beyond me. The referees must see what Costa gets up to, yet no one seems to put a stamp down on the behaviour.

A blatant slap in Laurent Koscielny's face was followed by a running battle with Gabriel, a player he has had previous with during their time in Spain. An argument escalated as Mike Dean lost control of the situation and somehow Costa was able to get Gabriel wound up to the point of kicking out and being sent off.

There is no doubting it was a key moment in the match which turned in favour of Chelsea, but something has to be done about Costa. Something to show him he can't keep doing this on a football pitch and expect to get away with it because the FA won't punish him retrospectively.

Referees have to have an eye out on him at all times and hopefully they can get on top of Costa and not allow a situation to develop where he is completely responsible for having a fellow professional sent off.


Since I wrote this, Diego Costa has been charged by the FA and does look set for a three game suspension for the 'punch' on Koscielny. 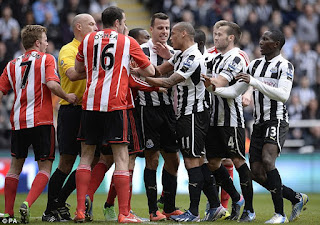 North East Footballing Troubles
Middlesbrough look to be a team on the up in this part of the world, but Hull City were relegated from the Premier League last season and both Sunderland and Newcastle United are looking like they are on a path to join The Tigers in the Championship.

Steve McClaren and Dick Advocaat have to be leading the 'Sack Race' at this moment in time as both Newcastle United and Sunderland struggle, but the Dutch manager is the one in more immediate trouble as far as I am concerned.

I can't imagine Mike Ashley making a snap decision on a manager he has appointed for just five games, but Advocaat has admitted he will walk if he can't begin to turn things around.

The worry for both teams has to be that they have lost some really disappointing games and ones they would have circled as 'can't afford to lose' type of games. Newcastle United losing at home to Watford is a very poor result, but the manner of Sunderland's losses at Leicester and Bournemouth has to be a concern.

You can't doubt the passion that supporters have in this part of England, but that can also lead to a toxic environment when things aren't going right. It doesn't get easier for either team this weekend as Newcastle United host Chelsea and Sunderland visit Manchester United off the back of Capital One Cup action and this already looks like desperate times for the two clubs in the North East in the Premier League. 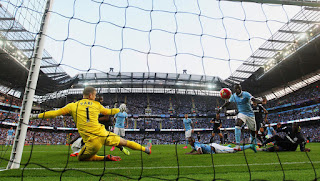 West Ham United are Displaying the Form to get into Europe
There has to be some sense of irony that Slaven Bilic is presiding over a West Ham United team that have won some impressive games that could lead to a European berth next season.

After barely giving the Europa League any attention this season, it would be funny if the side play well enough to get back into that competition next time around. The Champions League looks beyond them despite the form they have displayed in winning at Arsenal, Liverpool and Manchester City, but the lack of regard West Ham United showed the Europa League makes me wonder what is the ambition of the club?

Are they simply going to look to finish high enough to get into a position to be knocked out in the Qualifiers of the Europa League next season?

Or was it the fact they had to begin so early in European competition that bothered Bilic?

It is a strange situation to me, but take nothing away from West Ham United who have played some very attractive football this season. They rode their luck to win the game at The Etihad Stadium, as you have to sometimes, but adds to the impressive away wins in the Premier League.

If it wasn't for defeats to Leicester City and Bournemouth, which look even more surprising now, West Ham United might have been leading the pile in the Premier League. 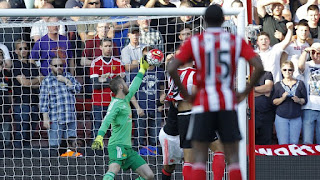 Take nothing away from some of the players brought into the club, but David De Gea has to be amongst the top two or three goalkeepers in the world and keeping him is a huge boost.

That image above doesn't do the save he made on Sunday any justice.

As he did last season, De Gea made a jaw-dropping save in the second half with Manchester United leading the game and it was a moment that effectively won the three points. They say goalkeepers are worth an additional three or four wins a season and De Gea certainly proved that point on Sunday with a save that truly was world class.

Watching in real time, I figured it was a certainty that the ball was about to hit the back of the net until somehow De Gea clawed it out from behind him and once again reminded everyone of the importance of keeping the Spaniard at Old Trafford. 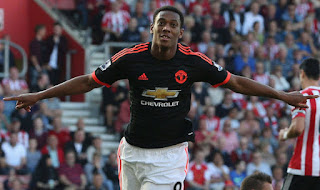 Anthony Martial Needs Time, but looks the Real Deal
I haven't said too much about Anthony Martial because I simply hadn't seen a lot of him prior to his move to Manchester United.

The price looked a big one, but it is one that will be determined by the career that Martial creates for him in the future.

His announcement with a fantastic finish against Liverpool was brilliant, but I also thought he played well in Eindhoven even if he didn't score.

However, the two goals against Southampton this weekend to help turn that game were very, very promising.

I don't really want to judge someone on a special goal like the one Martial got against Liverpool, but I love to see what a player is like doing the basics under some pressure.

The basics in this case were the composure in front of goal shown for the second goal, or Martial's decision making for the first to turn Virgil Van Dijk. Both were signs of someone who is completely calm in front of goal and there is no more of a confidence booster than seeing a player be able to do that.

I don't want to go overboard like some have the tendency to do, but it was the clinical finishing reminiscent of Ruud Van Nistelrooy that really appealed to me and makes me a believer in Martial. He is 19 years old so will have his ups and downs, but composure like he showed at St Mary's can't be taught and seeing him have that in the locker is a really big positive for me.

Give the young man time to develop the rest of his game and Manchester United really might have a star of the future on their hands.
Posted by Dav Aulak at 20:28