The first week of the NFL is in the books and I have decided I will try and put a recap in place in a different post to my 'NFL Picks' post which had become very long when the recap was added to that.

There were plenty of big storylines in Week 1 and I have put a few thoughts down about some of them. 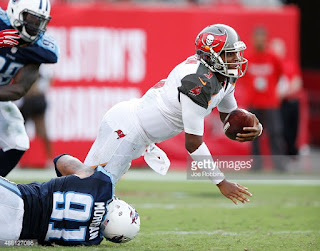 The Tampa Bay Buccaneers didn't believe that and selected Winston Number 1 overall, but he didn't have a good outing in Week 1 as he struggled to decipher the Tennessee Titans Defense.

Some of the errors he made, and got away with in College, were still at the forefront of Winston's play, but it is just his first ever NFL game and the Buccaneers can have plenty of other concerns rather than just the Quarter Back.

Winston's poor performance was magnified by how well Mariota played for the Tennessee Titans as he became the first rookie Quarter Back to throw FOUR first half Touchdown passes in his first start. However, Mariota is going to have much tougher Defenses to go against than this Tampa Bay one and there is the same overall feeling about both players after one game.

Namely, it is one game... You can't have an overreaction either way despite the positives around Mariota and negatives around Winston, but it is just one game and a career isn't judged on a single game. 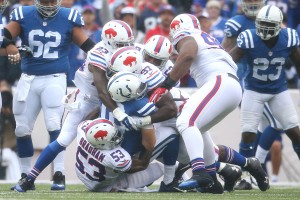 The Buffalo Bills May Be the Best Defense in the NFL
After what I said about overreactions to one game above, some may criticise me for doing the same thing after one game the Buffalo Bills Defense dominated against the Indianapolis Colts.

The difference is that rookie players are going to be inconsistent so I look at the two Quarter Backs above and think they are going to have good and bad games through the season.

This Buffalo Bills Defense is far from a 'rookie' one and clearly the pieces were already there last season. Rex Ryan might not have succeeded as he would have liked with the New York Jets, but he does get the best out of his players and I think he will make this Defense just a little stronger than last season which could make them the best in the NFL.

The pressure up front was incredible against the Colts, that picture above summing up Andrew Luck's day, and not many Offensive Lines could handle that pressure. It is a big test for Buffalo in Week 2 to back up that performance and prove they are for real when the New England Patriots come to town, but I really do think this Bills team could go very far as long as the Offense continues to manage the game as they did against Indianapolis. 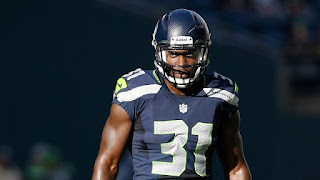 Kam Chancellor is Going to be Paid
It was a big decision from Kam Chancellor to sit out Week 1 as his dispute with the Seattle Seahawks continues and his absence certainly contributed to the Defense giving up 34 points in a Week 1 loss at St Louis.

The 'Legion of Boom' was down to 1.5 players in that game with Chancellor out and Byron Maxwell now in Philadelphia, while Earl Thomas looks half the player he is as he seems to be banged up.

Seattle are going to need the Defensive unit at their best because the Offensive Line looks horrific and I am not sure this is a team built to come from behind too often. If the Defense are giving up plenty of points, it will be tough for the Seahawks to make it three in a row when it comes to Super Bowl appearances.

I am not sure if Chancellor's stand off with Seattle will be settled by this Sunday, but I would be surprised if the Seahawks don't make the move to get him back to work. Another poor Defensive effort at the Green Bay Packers might certainly speed up negotiations and not many would have picked Seattle to be 0-2 after two games which has become a distinct possibility. 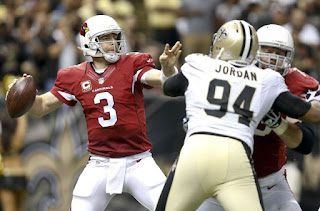 If Carson Palmer Remains Healthy, the Arizona Cardinals are a Real Super Bowl Contender
When Carson Palmer went down with an injury last season, the Arizona Cardinals were 7-1 and looked primed to take over as the NFC West Champions. A further injury to Drew Stanton ended the Cardinals real ambitions to play the Super Bowl in their own Stadium, and a Wild Card Play Off exit was expected as the injury bug hurt the whole roster.

Palmer was back for Week 1 and looked very, very comfortable with the keys to the Offense and he is more than a game manager that Arizona began to rely upon in his absence in 2014.

He is as important as any player on this roster for the Cardinals and could have a Kurt Warner type season if he gets through the season, one that ends with a Super Bowl appearance.

Winning the NFC West won't be easy, but the Cardinals look strong on both sides of the ball and if they could somehow come away with the Number 1 Seed in the NFC, I think it will be very difficult for a team to go to Glendale and knock them off.

The two games in Week 16 and Week 17 when Arizona host Green Bay and Seattle could be crucial to Play Off Seeding and keeping their Quarter Back healthy will put this team in a position to win it all. 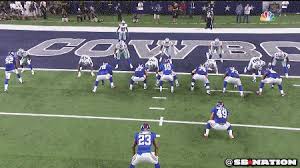 What Were the New York Giants Thinking?
Look, I don't have two Super Bowl winning rings like Tom Coughlin and Eli Manning have, but I could only shake my head in embarrassment at the way the New York Giants blew their Week 1 game at the Dallas Cowboys.

Anyone who plays Madden or has watched Football for any length of time, from 10-70 years old, would have known the simple plays to run when the New York Giants got down to the 1 yard line for a 1st and Goal with under two minutes left.

The Cowboys had two timeouts, so the obvious calls with a three point lead were for the Giants to run the ball twice with the hope they score the Touchdown or force the Cowboys to use their last two timeouts.

At Third Down the main option has to be running the ball knowing you either score to go ten points up, or you try and catch the Defense with a surprise pass and score that way.

If throwing, you DO NOT throw the ball out of the End Zone and stop the clock running, you either take the Sack or you try and run the ball in. I couldn't believe Eli Manning did the one thing you simply can't do and the fact the Cowboys scored with 7 seconds left just underlined the mistake as the Giants saved them around 30 seconds with that dumb decision.

Both Coughlin and Manning took the blame as they should have, but you know what makes the Third Down call even more baffling?
How about Rashad Jennings telling the press that he was told not to score by Eli Manning, something Manning hasn't disputed... So why was the pass called in if the Giants didn't want to score?!!!!!!!!!!!

If I thought it was poor clock management while watching the end of the game, I now think it is actually incompetent of the Giants to run a passing play when they have said they don't want to score. I guess the Football Gods decided they had to be punished with a great drive run by Tony Romo to win the game for Dallas. 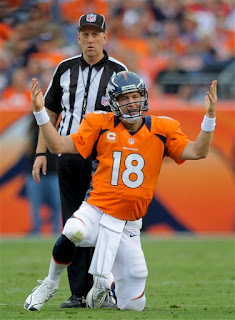 Is it Time to be Concerned for Peyton Manning?
I figured the torn quad that Peyton Manning was playing with at the end of last season had affected him massively, but, wow, did he look bad in Week 1!

I don't know how much blame I want to apportion to the Offensive Line, which had struggled in protection, because Manning didn't exactly light it up when he did have time to throw. Everything was short and he didn't challenge Baltimore deep too often.

If it wasn't for the Defense, the Broncos don't win that game in Week 1 and they would be travelling to the Kansas City Chiefs in a very difficult spot even this early in the season.

Peyton Manning has a chance to bounce back against the Chiefs and prove there is still something left in the tank, but I also think he needs to get his head around the Gary Kubiak system. Manning also wasn't helped at all by the running game and that is a key for him, but the bubble screens that have been so successful for Denver were blown up constantly by Baltimore.

I definitely want to see some big improvements from Manning in the next couple of weeks to remove this doubt I have about him.


Top Ten
1) Green Bay Packers (1-0): This is the team I would pick to win the Super Bowl at the start of the season and I can't knock them off after a Divisional win.

2) Arizona Cardinals (1-0): As I have said above, if they can stay healthy, particularly Carson Palmer, the Cardinals can win it all.

3) New England Patriots (1-0): Team to beat in the AFC as the reigning Champions, but a big test for them in Week 2 will show where the Patriots are.

4) Denver Broncos (1-0): I am concerned about Peyton Manning, but the Defense looked legit in Week 1 and I am still not completely bailing on the Quarter Back.

5) Dallas Cowboys (1-0): Barely escaped with a win in Week 1 and lost Dez Bryant and Randy Gregory for a few weeks which will hurt.

6) Buffalo Bills (1-0): If Tyrod Taylor can continue to manage the game as he did in Week 1, Buffalo's Defense is good enough to help break the 15 year streak without a Play Off appearance.

8) Seattle Seahawks (0-1): They need to bring back Kam Chancellor into the fold and the Seahawks have to get better protection for Russell Wilson, but Seattle still one of the top teams in the NFC.

10) Atlanta Falcons (1-0): With Matt Ryan and Julio Jones on the Offense, scoring points has never been a problem for Atlanta. However, if Dan Quinn can inspire the Defense to perform as they did in the first half of the win over the Eagles, Atlanta might be a dark horse for a deep run this season.

Bottom Five
32) Washington Redskins (0-1): A good team would have put the Miami Dolphins away last week, but Washington are far from a good team.

28) Jacksonville Jaguars (0-1): This did feel a season that Jacksonville could start proving that Gus Bradley is getting things right at the franchise, but they were just horrible in being beaten by Carolina at home in Week 1.

I can't complain about the Week 1 Picks which saw five of the eight picks return as winners and another coming back as a push.

Apparently the Vegas casinos described it as the worst opening weekend of the NFL for twenty years and that means the next couple of weeks are going to be dangerous.

They haven't made those huge hotels out of having weeks like last week on a regular basis and I have definitely taken note and will look to avoid getting caught in the backlash.
Posted by Dav Aulak at 01:15