With another international week ahead of us, the last Premier League weekend proved to be one filled with drama and big stories as the first two managerial casualties of the top flight were confirmed, while the top and the bottom of the Premier League has begun to take shape. 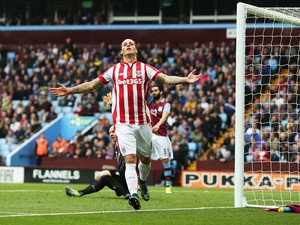 Are the Bottom Three in Danger of Being Cut Off From the Rest?
That image is of Marko Arnautovic celebrating his winning goal for Stoke City at Villa Park on Saturday which moved his side clear of the bottom three after opening the weekend in 17th place in the League table.

With a win over Aston Villa and both Newcastle United and Sunderland also failing to earn the three points over the weekend, all of a sudden there is a four point gap between 17th and 18th place in the Premier League.

Yes, there are still 90 points to play for this season so there is no immediate danger of the bottom three clubs being cut off, but that gap has to be a concern to Tim Sherwood and Steve McClaren in the bottom three.

It has been a competitive Division over the first couple of months, but only Newcastle United and Sunderland have yet to win, while Aston Villa haven't won since the opening day of the season. The fans of these clubs have to be a little worried over the next two weeks before the Premier League returns because I am not sure how much improvement those clubs will make in that time.

You can't be anything but worried when you're not too convinced about a club's chances of beating any other in the League and these three clubs in the bottom three don't inspire much confidence.

It is going to be a big month of football for Aston Villa, Newcastle United and Sunderland following this international break until the next month in the middle of November. They Tyne-Wear derby on October 25th looks huge too and I would already begin to consider two out of these three as being big favourites for relegation come May. 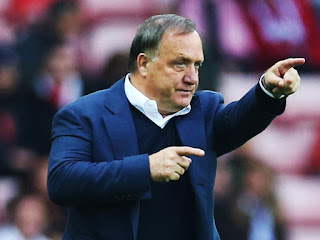 Dick Advocaat Unsurprisingly Walks Away from Sunderland
The first managerial casualty of the Premier League unsurprisingly came at the Stadium of Light where it was considered fairly certain that Dick Advocaat was going to leave Sunderland no matter what happened in the game against West Ham United.

Seeing his team blow a 2-0 lead in a 2-2 draw didn't do much for the Dutchman and I don't blame him for walking.

Sunderland have never been transparent as to who is running the transfers at the club but I think the previous comments from Paolo Di Canio and Gus Poyet suggest the manager perhaps doesn't have as much control as is needed. Advocaat's decision to walk might have been influenced by the lack of quality that was brought into the club without his go-ahead and I am personally not a big fan of 'committees' running the transfer side of a club because these people take little to no responsibility when things go wrong.

Fans and the media will look at the manager and the buck will stop with him and a manager that retired in the summer only to make a U-turn is unsurprisingly not wanting to deal with the pressure of a relegation battle.

I think it is also telling that someone like Harry Redknapp made it clear openly that Sunderland is not a job he would be willing to touch because of the quality of players at the club. He even suggested Sam Allardyce is unlikely to take on the job and all the Houdini acts Sunderland have committed to escape the drop looks unlikely to be repeated this season.

Sunderland simply haven't had the most taxing of fixture lists to be stuck on three points from a possible twenty-four and it will take something special for them to drag themselves out of the bottom three. Someone has to take responsibility for the shocking signings that have left Sunderland as a mess at the back and not being able to score enough goals to cover those issues.

This looks like it is going to be a long season for Sunderland unless they can find someone who can inspire a poor crop of players for long enough to bring in reinforcements in the January transfer window. Even those reinforcements might not be enough barring another miracle for Sunderland who have looked the worst team in the Premier League by a considerable distance so far. 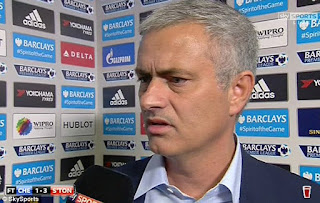 When Will Chelsea Hit Rock Bottom in this Season?
I'll admit that I have thought Chelsea are about to turn the corner a couple of times already this season, but they continue to make the defensive mistakes that have prevented a consistent run.

Hands up if you picked Chelsea to be in 16th place in the Premier League table going into the second international break of the 2015/16 season... Not many hands that I can see!

Jose Mourinho is under immense pressure as his 'rant' to Sky Sports at the end of another poor home defeat showed, while the players look to have inexplicably downed tools.

Have they given up on the manager, something Mourinho said would be the only reason he would resign as manager of Chelsea? Some of them certainly look like they are not pulling their weight as expected, while there is no consistency to the team line up which isn't helping things.

Some have suggested the players aren't pleased with the tactics that Mourinho insists on playing and ex-England and AC Milan manager Fabio Capello went as far as saying Mourinho has worn out his players. Capello said the same was said after Mourinho's time at Real Madrid and perhaps that is a big reason that 'third season syndrome' affects Mourinho's teams as much as it seems to in seasons he has remained as long as that at one club.

It is baffling to perfectly honest because it looks like some of the veteran players have aged overnight and maybe Mourinho did get the best out of them last season and they have nothing left. John Terry was terrible in the loss to Southampton, Nemanja Matic was withdrawn in the game and Chelsea lack options up front with Diego Costa out suspended.

Games are not going to get easier for Chelsea once they are out of the international break. The face big trips to Dynamo Kiev, West Ham United and Stoke City (in the League Cup and the Premier League), while Liverpool visit Stamford Bridge and things may get worse before they get better for Mourinho.

One question remains though... Will Chelsea keep their 'full support' behind the manager if they lose two or three more games between October 17th and November 7th? 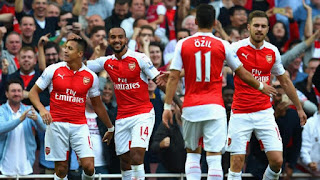 And Then There Were Three
Thierry Henry said in the wake of Arsenal's 3-0 win over Manchester United that Arsene Wenger won't have a better chance to guide his team to the Premier League title than he looks like he will have this season.

Chelsea are unlikely to defend their title with their continuing struggles and 10 points looks a lot to make up on Manchester City who lead the way.

Despite the loss to Arsenal, Manchester United remain in the thick of the battle to become title contenders although the next month will tell us a lot more about Louis Van Gaal's men once they play at Everton, Manchester City at home and Crystal Palace away.

Manchester City will be there or thereabouts as long as Manuel Pellegrini keeps them focused better than he has at times and also manages to get a full season out of Sergio Aguero and those three teams lead the way when it comes to potential winners.

With Chelsea struggling at the moment, a top four berth for a surprise contender is certainly up for grabs, while Liverpool might feel a big change in the manager's office potentially gets them back in the mix as they are only 4 points behind Arsenal and Manchester United.

If I am being honest, I am still expecting Manchester City to push clear in the coming months, but the Premier League certainly has an open look about it as we get closer to the ten game mark which is supposed to give us the clearest picture of how things will develop. 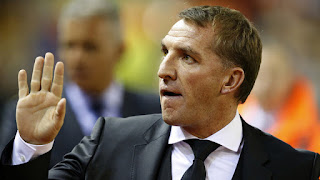 Brendan Rodgers' Time is Up at Liverpool
The rumours about Brendan Rodgers' future as Liverpool manager began as far back as April when his side limply went out of the FA Cup Semi Final to Aston Villa, but this still feels a strange juncture at which the decision was made to remove the Northern Irishman from his position.

There are definitely some arrogance around Rodgers and an almost undeserving belief that he has been surpassing expectations at Liverpool, but I also think he is a better manager than those who love revising history would care to admit.

He almost took Liverpool to the title behind some breathtaking football and while some will point to Luis Suarez being the main source for that, I would hesitate in diminishing Rodgers' role in the 2014 season. He got the best out of Steven Gerrard and Daniel Sturridge that season to complement Suarez and it was only a bit of naivety that prevented Liverpool winning the League in the final three games when they were big favourites to do that.

That game with Chelsea when Liverpool pushed on for goals when a draw would have sufficed is perhaps the one moment Rodgers would love to go back in time and adjust his own tactics you'd think and it would have made him virtually untouchable at Anfield right now.

He made mistakes- the signing of Mario Balotelli was never going to work as a replacement for Suarez, but a long-term injury to Daniel Sturridge was bad luck.

Liverpool are not that far off the top four places so I think the timing was strange, but I guess someone, Jurgen Klopp, has given the nod he is ready to return to management and the owners believe he can get more out of the squad that has been put together. Klopp looks the perfect fit for Liverpool as someone who made some impressive signings on a small budget at Borussia Dortmund, but was also capable of replacing big players that were sold.


It is much harder to see where Rodgers goes from here- perhaps he takes the David Moyes approach and look to manage abroad because the only way is down from Liverpool in the Premier League. He is still young enough to come again, but not many managers get more than a single shot at the very big clubs in a single country and Rodgers might be best to rebuild before returning to England.

You can understand his disappointment- he was three games away from becoming a Liverpool legend yet eighteen months later is out of the door at Anfield and now being widely criticised for his tenure.

I think it is harsh that his performance is being downplayed in hindsight, but that is football these days when managers go from one extreme to another in a very short period of time. Rodgers can just make a quick call to his friend Jose Mourinho to understand that as he exits the limelight for the foreseeable future.
Posted by Dav Aulak at 01:57