The NFL season is beginning to take shape and next week will see the first quarter of the season put in the books and it is also the start of teams taking in their bye weeks. I think the majority of teams prefer taking in a later bye week to make sure their team is healthy for the final few weeks of the season, but it is the New England Patriots and the Tennessee Titans who have drawn the short straw in being the first two on a bye week in Week 4. 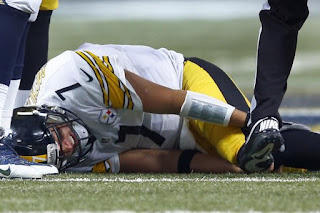 Can the Pittsburgh Steelers Overcome Ben Roethlisberger's Injury?
Injuries are part and parcel of the NFL, but in this day and age when there is plenty of protection for the Quarter Backs, it is a shame that a second Super Bowl contender has lost their starting Quarter Back for multiple weeks.

Last week it was the Dallas Cowboys losing Tony Romo and this week it is the Pittsburgh Steelers losing Ben Roethlisberger, although reports indicate the latter could be back in around four weeks time.

That would put Big Ben in line to return in Week 8 in time for a three game home stand for the Steelers before going on their bye and the question is whether he will be returning to a team that is still in contention for a Play Off place.

The Cincinnati Bengals have opened up on fire and lead the AFC North with a 3-0 record so the key for the Steelers is to try and stay with them before Roethlisberger returns.

Unfortunately for Pittsburgh, the schedule isn't too kind as they face the Baltimore Ravens on a short week at home, before travelling to San Diego, hosting Arizona and then heading to Kansas City.

The best case scenario is Roethlisberger returns at time to face the Cincinnati Bengals, but Pittsburgh could easily go 0-4 in his absence meaning Mike Tomlin doesn't rush back a Quarter Back for a 2-6 team. The key to the decision might be how the Bengals do because their next three games all look difficult on paper and this is a team that might only be 5-2/4-3 ahead of that game with the Steelers which is not an insurmountable lead.

No matter what, there is no disguising the huge blow this has been to Pittsburgh who had the best Offense in the first two weeks of the season and just got Le'Veon Bell back in the line up. Now they need Michael Vick to turn back the clock and perhaps produce some magic to at least see the Steelers go 0.500 in their next four games and just manage themselves into a position to still contend for the Play Offs by the time Big Ben returns.

The NFC South not the Mediocre Division of 2014
That image shows where the NFC South teams were placed with a couple of games left last season as the Carolina Panthers became only the second team to go to the Play Offs with a losing record.

Three of the four years prior to 2014 had seen the NFC South produce two Play Off teams and they might be on course to do the same in 2015.

You can probably draw a line through the New Orleans Saints, who might be missing Drew Brees for multiple weeks and are already at 0-3, and the Tampa Bay Buccaneers who will have teething problems with rookie Jameis Winston at Quarter Back.

However, both the Carolina Panthers and the Atlanta Falcons have begun at 3-0 this season and neither has a schedule problem going forward. Being matched with the NFC East hasn't proved any trouble for the Falcons whose three wins have all come against that Division and they do have the easier schedule of the two leaders of the NFC South as the Panthers have to play Division winners from a season ago including the Seattle Seahawks and the Green Bay Packers.

Both teams will feel they can keep their momentum going forward though, although I think Carolina still have something to prove Offensively if they want to make it three NFC South Division titles in a row. There are enough positives though and both Carolina and Atlanta may already be thinking of the special season they could potentially have ahead. 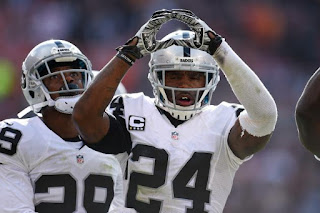 Mark Davis has been a much more sensible owner than his father by employing patience in the rebuild, while General Manager Reggie McKenzie is showing why he was so highly rated at the Green Bay Packers.

There have been some very good Draft picks in recent years and the likes of Derek Carr, Amari Cooper and Khalil Mack are the kind of building blocks on which to turn around a franchise.

I was a little disappointed with the way Oakland played against Cincinnati in Week 1, but back to back wins over Baltimore and in Cleveland have backed up my feeling about this team and the direction they are heading.

No doubting that there is still work to do, but Jack Del Rio is a solid Head Coach and the patience being shown in getting this franchise turned around has to be respected. 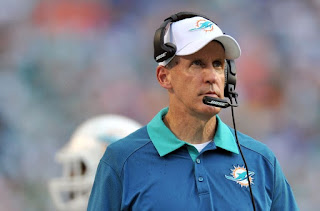 Joe Philbin Should be Fired and Left in London by the Miami Dolphins
So after praising the patience that the Oakland Raiders are using to get their franchise turned around, it might be strange to see me then writing in the next paragraph that Joe Philbin needs to be fired.

I've had enough to be honest.

The Miami Dolphins have had the talent to reach the Play Offs in recent years but have been stuck in the mediocrity of 8-8 or 7-9 finishes thanks to poor results to end the seasons. For the second season in a row they are 1-2 heading to London, but this this time it is for a crucial Divisional game and I do think a loss should see the end of Philbin's time as Head Coach here.

Zero passion, poor play-calling, bad clock management- these are the things I recall from Philbin in his time as Head Coach and the beat down suffered at the hands of the Buffalo Bills was simply embarrassing at home.

The Defense has been appalling with reports of Ndamukong Suh going rouge on plays, while Ryan Tannehill continues to struggle behind a porous Offensive Line that can't set up any semblance of a rushing attack.

Something has to be done about a Head Coach that is beginning to feel the wrath of the fans but it looks like it might be another lost season for a team with plenty of talent, but plenty of holes. The worst thing about finishing 8-8 is you can't even pick up a huge talent to make a big difference high up in the Draft, so the only possible reason for keeping Philbin is if the players have given up on him and the Dolphins can get a high Draft pick for next season.

I still think there is time to turn around this season and firing Philbin after Week 4 means Miami have a bye week to try and turn things around- hell, I'd fire him even if Miami beat the New York Jets whose Head Coach Todd Bowles has been an Interim Head Coach at the Dolphins in the past.

I know I am not the only one who has had enough of this terrible Head Coach, it's time for Stephen Ross to admit his mistake in extending his contract and cut his losses after Week 4.

3) New England Patriots (3-0): Some people are talking about New England matching their 2007 regular season when they remained unbeaten before eventually going down in the Super Bowl.

4) Denver Broncos (3-0): The Denver Broncos won another tough road game and the Defense continues to play at a high level and surprisingly are carrying Peyton Manning a little bit at the moment.

5) Cincinnati Bengals (3-0): I am still not completely convinced the Cincinnati Bengals are for real, but they deserve to move up for the way they won at the Baltimore Ravens and are big favourites to win the AFC North in the wake of the Ben Roethlisberger injury.

7) Seattle Seahawks (1-2): They needed that win over Chicago and the Defense looked dominant, albeit against Jimmy Clauson.

8) Dallas Cowboys (2-1): Dallas gave that game away against Atlanta, but the Cowboys are soon going to get some reinforcements on the Defensive side of the ball which can help protect leads.

9) Minnesota Vikings (2-1): Two home wins against Detroit and San Diego are solid wins, but the return to form of Adrian Peterson can certainly carry this team to the Play Offs.

10) Buffalo Bills (2-1): I dropped them out of the Top Ten after the battering at the hands of the New England Patriots, but Buffalo bounced back effectively with a big road win at Miami. I placed Buffalo ahead of the likes of Indianapolis and Pittsburgh because of the performance of the former and injury to Big Ben for the latter.


Bottom Five
32) Chicago Bears (0-3): This looks a long process to get the Chicago Bears turned around. Jared Allen was traded to the Carolina Panthers this week and more moves are expected before the trade deadline.

31) New Orleans Saints (0-3): They battled hard, but the New Orleans still fell to 0-3 with a loss to the Carolina Panthers and Drew Brees remains questionable for an immediate return from injury.

30) Miami Dolphins (1-2): Have the players given up on Joe Philbin and the coaching staff? Week 3 suggested they have, but they went to London 1-2 in 2014 and bounced back with a huge win over the Oakland Raiders so watch this space.

29) Tampa Bay Buccaneers (1-2): The Buccaneers were beaten at Houston last week, but the focus might have been on the home Divisional game against Carolina this week.

28) Washington Redskins (1-2): I moved the Tennessee Titans out and the Washington Redskins in after the way the two teams performed in big Divisional games in Week 3. Kirk Cousins is simply not the answer to any decent question Washington are posing and the trade for Robert Griffin III has set the franchise back massively.

Week 3 Picks Recap
After a rough end to Week 2 which saw my final two picks come out on the wrong side and thus produce a losing record, Week 3 was back in the positive and helped put up strong numbers to open the season.

I will be looking to complete the first quarter of the regular season with another positive week, but I also know how quickly things can turn around if you lose focus or even hit a patch of bad luck.

Eight of the ten picks in Week 3 came in as winners and even the two losing picks can be seen as hard luck cases- Dallas had a big lead against the Atlanta Falcons in the first half, but then fell apart to lose, while the Indianapolis Colts were up eight with under three minutes remaining but allowed the Touchdown only to prevent the two point conversion Tennessee needed.

Go back and look at the picks and I think you'll agree that, aside from perhaps the Houston game where Tampa Bay missed some Field Goals that likely prevent the cover, I didn't really get 'lucky' with my picks.

The likes of Philadelphia, Minnesota, Arizona, Buffalo and Green Bay all won by wide margins despite two of those teams being underdogs and all of them favoured by less than a converted Touchdown.

So I am happy with how the picks have gone to this point, but, as I said after Week 1, things can change quickly in the NFL and this is far too early to be in congratulatory mode.

Week 4 Picks will begin on Thursday through until Saturday for the entire slate of games to be played.
Posted by Dav Aulak at 02:04