The season is really beginning to take shape for teams in the NFL, but we are also hitting some critical junctures for others that have been struggling with either injury or failing to put up the wins that they might have expected to.

Most of the big stories this week actually came out of College Football where both Steve Sarkisian and Steve Spurrier were moved out of Head Coaching roles at Southern California and South Carolina respectively.

There are still some thoughts from the NFL in Week 5 that I would like to put down below. 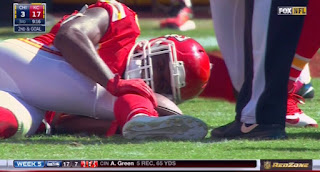 Disappointing Jamaal Charles Injury Likely Ends the 1-4 Kansas City Chiefs' Season
There are some folk out there that get a little too concerned about Fantasy Football that they forget these are real human beings out on the field rather than a stat line.

Hopefully there won't be too many morons giving Jamaal Charles too much grief after he was lost for the season on a non-contact play in the Week 5 Kansas City Chiefs loss to the Chicago Bears. It came at a point where the Chiefs looked to be cruising to the victory as they had the ball with a First and Goal while up fourteen points.

Charles was confirmed out for the season on Monday and I think the Chiefs' season aims go with him as the best Offensive player they have even if Andy Reid can forget that sometimes. Now they will need Alex Smith to do more than he is usually comfortable trying, while the Defensive unit hasn't played as well as they would have liked.

Kansas City are 1-4 which leaves them four games behind the Denver Broncos in the Division and I am not sure the Chiefs will be able to pick themselves up from such a devastating loss. I simply don't know how they score enough points to keep up with opponents going forward and the Chiefs may instead be looking at a very high Draft pick next year. 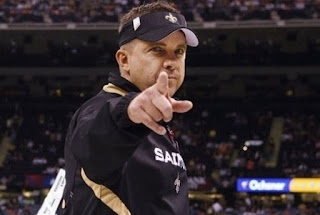 The New Orleans Saints Should Listen to Trade Offers for Sean Payton
The New Orleans Saints were largely disappointing last season, but they look even worse this time around and a team that is struggling against the cap and with ageing players like Drew Brees on big contracts could be ready to start the process all over again.

Everyone in New Orleans will always be grateful to Sean Payton and Drew Brees bringing a Super Bowl to the city following the devastation of Hurricane Katrina. However, both men could be done in New Orleans by the end of the season and hearing a fresh voice at Head Coach might be what this franchise needs to get turned round.

The likes of the Miami Dolphins are apparently very keen on offering Draft Picks for Sean Payton whose contract has two years to run and that might be important for the Saints. Adding Draft Picks has been a key for them in the last off-season as they know there are plenty of areas in which to improve their team and they do need to bring in playmakers on both sides of the ball.

Payton has been there a long time and blowing things up and starting again would be pointless under a Head Coach who may feel he is ready for a new challenge anyway.

At 1-4, the Saints have a huge game this week when they host the Atlanta Falcons, but a loss in that game might put a fork in this season and New Orleans can start making some real plans as to what they will do when teams come calling for Payton's services. 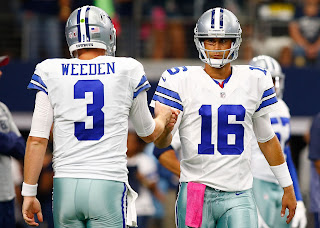 Benching Brandon Weeden Looks to be the Only Move Available for the Dallas Cowboys
When I was planning on the points I wanted to discuss after Week 5, the first was going to be Brandon Weeden and the fact I thought Dallas had to make the move to bench the Quarter Back during their bye week.

Weeden might have some decent completion numbers and he might have set the record for consecutive passes completed but he wasn't taking any chances and he continued to lose games.

Dallas will look back at the losses to the Atlanta Falcons and the New Orleans Saints which might be the key defeats that cost them a Play Off place at the end of the season, even if Weeden wasn't completely at fault. There are other aspects of the Dallas Offense that has disappointed too, especially the Offensive Line opening holes for any of the Running Backs and the Receivers struggling without Dez Bryant drawing attention across the field, but there will be more changes that are expected to be made.

However I think Weeden had to be benched because Defenses simply didn't think he had the arm or the belief to beat them and that just saw Dallas play a short passing game that didn't get the chains moved. He made some strange decisions to drop deep and then fail to move away from the pass rush and Weeden just doesn't look like a winner at this level.

Now that doesn't mean I am high on Matt Cassel, quite the opposite in fact, but he can't be any worse than what the Dallas fans have seen in the last three weeks and might just spark the rest of the Offense. How quickly he figures out the play book is going to be key for Cassel, especially with the next game against the New York Giants in Week 7, but I don't blame Dallas for making the Quarter Back change as they look for a spark Offensively. 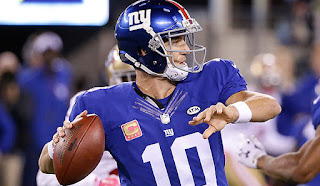 Is this the Best Form of Eli Manning's Career?
He has won two Super Bowls and was the MVP in both games and Eli Manning certainly got hot in those Play Off runs to help the New York Giants to success.

However, Manning might never have played better in the regular season than he has in the five game period to open this season. He is on pace to secure a career high in terms of yards and Touchdown passes thrown, and perhaps even the best Interception totals.

Manning is doing this without Victor Cruz and it is only two mental mistakes that have cost the New York Giants from being 5-0 and perhaps having him being talked about as a potential MVP for the regular season.

On the other hand, it was his running of the two minute Offense that helped the Giants beat the San Francisco 49ers on Sunday Night Football and now Manning has a very big game at the Philadelphia Eagles on Monday Night Football to perhaps underline how well he is playing.

He will be hoping Odell Beckham doesn't have any setbacks though as Manning continues to produce the big numbers that have been missing from big brother Peyton's early season form. 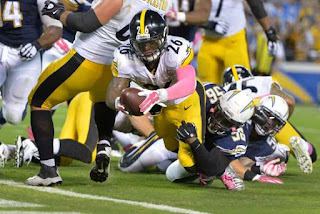 Gutsy Call Could be Huge for Pittsburgh at End of the Season
Mike Tomlin was criticised for calling two Fourth Down plays in an eventual loss to the Baltimore Ravens in Week 4- he took his chance on those in Overtime instead of going for the long Field Goal and that defeat looked like being a devastating one for the Pittsburgh Steelers.

With Ben Roethlisberger out injured, Pittsburgh are just trying to stay afloat in the AFC before their Quarter Back comes back so beating a fellow Conference team who are also 2-2 could be a huge bonus for them at the end of the season.

It was an incredibly gutsy call from Mike Tomlin to allow Le'Veon Bell to take the Wildcat snap from the one yard line with five seconds left on the clock and unlikely to have the chance to stop the clock even if the play came up short.

Bell only got in on a second effort but that could be such a big win for them with the tie-breaker over San Diego, moving above 0.500 and rumours that Roethlisberger isn't too far away from returning to the team.

After all the criticism Tomlin and the Steelers took for their management of the Overtime loss to Baltimore, they need to be given a lot of credit for winning this game by taking a chance rather than kicking the tying Field Goal and going back into Overtime for a second consecutive game.

3) Cincinnati Bengals (5-0): Moved them above the Denver Broncos for securing the statement win over the Seattle Seahawks and coming back from 17 points to do that.

4) Denver Broncos (5-0): In control of the AFC West but still relying on the Defense to get it done and will face better Offensive teams than they have so far.

5) Arizona Cardinals (4-1): An impressive win in Detroit, but the Lions virtually handed that game to them.

6) Atlanta Falcons (5-0): I can't help feel that the Atlanta Falcons will be found out sooner rather than later... You simply can't keep going into the Fourth Quarter behind and finding a way to win those games.

7) Carolina Panthers (4-0): Moved up without playing a game, but was close to moving the New York Giants above them after a third straight win.

9) Buffalo Bills (3-2): Injuries are hurting them on both sides of the ball, but the Buffalo Bills showed their character in winning at Tennessee and might have some reinforcements this week. Tyrod Taylor looks set to play on Sunday which is huge for the Bills too.

10) Seattle Seahawks (2-3): The Offensive Line is terrible, Marshawn Lynch has been banged up and I am wondering if the Legion of Boom have been found our and worked out how to be exploited. Seattle barely hanging on to a top ten spot for me.


Bottom Five
32) Miami Dolphins (1-3): Can't wait to see how much Dan Campbell has been able to do in the bye week.

31) San Francisco 49ers (1-4): Put in a big effort at the New York Giants, but it was Colin Kaepernick's best game and they still didn't win.

30) Detroit Lions (0-5): They look like they have given up on Jim Caldwell at Head Coach and will drop to the bottom of my Rankings if they lose this week.

29) Jacksonville Jaguars (1-4): Three straight losses, including to the Tampa Bay Buccaneers, and you have to drop Jacksonville into a position they have become accustomed to over the last couple of years.

28) Tennessee Titans (1-3): I had a few options here, but Tennessee can make it a short stay by knocking off the Miami Dolphins in Week 6.


Week 5 Picks Recap
It was the worst week of the season for the picks, but they looked to be in a good position going into the final two games of the weekend. However, the New York Giants failed to cover on Sunday Night Football which meant I needed a San Diego Chargers cover on Monday Night Football to produce another winning number.

Even a push would have limited those losses, but the Le'Veon Bell Touchdown as time expired ended that chance too.

The Jamaal Charles injury was unfortunate in that Kansas City seemed to be massively affected by it and failed to do anything Offensively from that moment. When you think they had a First and Goal and a fourteen point lead, the Chiefs looked in a great position to win convincingly before falling apart as Charles went down.

The Oakland Raiders and Cincinnati Bengals may have covered on another day with better Field Goal kicking or preventing the big turnovers (both conceded Defensive Touchdowns), but the only positive is that the season is still in a very strong position going into Week 6.
Posted by Dav Aulak at 01:01