Another NFL Week is in the record books and so it is onto the Week 7 Recap. 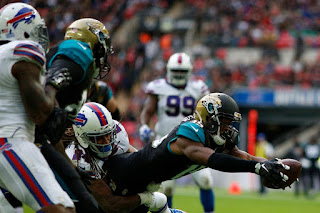 Is Rex Ryan Really Head Coach Material?
There was a lot of excitement in Buffalo this off-season when Rex Ryan was appointed the new Head Coach especially as they looked to have all the Defensive pieces to really challenge the AFC East dominance of the New England Patriots.

A win over the Indianapolis Colts on the opening week of the season looked to have underlined the potential that Buffalo had this year, but I think the former have just looked plain bad and that win hasn't looked as good as it did in Week 1.

A beat down from the New England Patriots put the Bills back in their place, but the bigger issue has to be the fact that Buffalo haven't had back to back wins all season and go into their bye week with a losing record.

After all the excitement and expectation for the season, going into the bye week at 3-4 after losing to the Jacksonville Jaguars in London is a bitter pill for the fan base to swallow. Questions have to be asked about Rex Ryan whose bravado quickly evaporated at the New York Jets after leading that team to back to back AFC Championship Games.

Since reaching the second of those Conference Championship Games, Rex Ryan is just 29-42 as a Head Coach and I do wonder if his soundbites perhaps sees him escape the criticism that he should receive. That is a pretty terrible record and now the Bills are underachieving and I think the pressure has to be building on Ryan who may simply be a great Co-Ordinator but an average Head Coach.

Buffalo have had injuries that some Rex Ryan fans will point to, and I accept that has been the case in Offensive positions, but the Defensive unit have not exactly been as productive as hoped. They have just 11 Sacks all season which is terrible considering the money invested in the Defensive Line and a Defensive Head Coach like Ryan has to take some responsibility for that.

Ill discipline is also on the Head Coach and Buffalo are the most penalised team in the NFL and I do wonder how much time Rex Ryan will get here. Missing the Play Offs this season might not be a deal breaker for him, but another poor start in 2016 would almost certainly end the Ryan tenure in Buffalo and I think he will do very well to get another shot at a Head Coaching role. 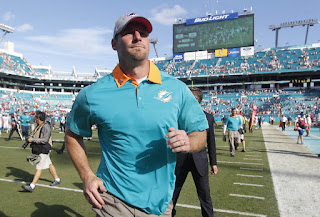 Dan Campbell Doing Enough to Earn a Permanent Head Coach Role
The Miami Dolphins were a mess when leaving London after a blow out loss to the New York Jets, but Stephen Ross finally made the correct decision in firing Joe Philbin.

The team represented Philbin in being flat, unemotional and rarely looking like one that had too much belief that they could win enough games to make the Play Offs.

From the opening introductory press conference, Campbell has looked a Coach that will demand every ounce of respect from the players and credit to the players for responding in the professional manner. This is a man that exudes passion and commitment and the troops have followed on the field in the first two games he has taken charge of.

Granted it is only Tennessee and Houston, but Miami dominated both opponents in blow out wins and the Dolphins are now back in contention for the Play Off positions in the AFC.

Now comes the big test for Miami though as they take on the New England Patriots on Thursday Night Football, the unbeaten Patriots who have dominated teams through the season. This is a litmus test for Dan Campbell but even if Miami are beaten, it will be key for them to show the passion they have in the last couple of games to keep the team going in the right direction.

And if Campbell is able to take this team to nine or ten wins and challenge for a Play Off spot, I think he becomes a serious contender to take the permanent Head Coaching spot in Miami at the end of the season. 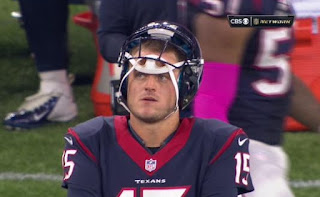 Ryan Mallett is Deservedly Cut By the Houston Texans
I don't like anyone who has talent but clearly doesn't want to put in the work to really achieve something and instead wants to glide through life off the back of that talent.

I had wrote a piece basically talking up the reasons why the Houston Texans had to cut Ryan Mallett after his latest timing issues, but the Texans managed to get that done before I published this Recap.

You can't oversleep and miss flights through traffic issues because you're the back up now. Mallett has looked disinterested since being yanked by Bill O'Brien and keeping him in the locker room would do nothing for the Houston Texans.

O'Brien had to show he is the Head Coach and is not going to carry passengers or accept players to show up when they feel like and it was the right decision.

I'd also be surprised if Mallett is given another opportunity in the NFL after failing in both New England and Houston, especially with serious character concerns surrounding him. 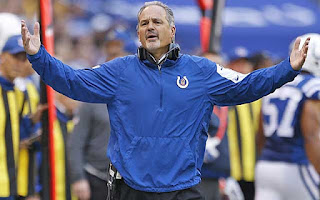 The Indianapolis Colts Look Like This Season's San Francisco 49ers
What I mean by that is the Indianapolis Colts look like a team with plenty of talent that is being destroyed by the discord between their Head Coach and General Manager. It is also an open secret their Head Coach is likely to be gone by the end of the season regardless of how well he does and that has filtered down to the players who have struggled to perform consistently.

The one major difference between the Colts and the 49ers of last season is the Divisions they play in- San Francisco and Jim Harbaugh had to deal with the Seattle Seahawks and the Arizona Cardinals and were going to have a tough time winning the Division even if everyone was on the same page.

That isn't the case for the Indianapolis Colts who are in the awful AFC South where they lead despite having a 3-4 record. It says something that they are 3-0 in Divisional games but 0-4 outside of those and the Colts look a mess at the moment.

Chuck Pagano's role as Head Coach is unlikely to last like Harbaugh's did through the season though and the rumour is that he might be done after this week. The other major obstacle for Pagano to cross if he is to see out the season is the Week 10 bye especially if the Indianapolis Colts roll into that with a 3-6 record and it looks a matter of when not if for the Colts to make the change now. 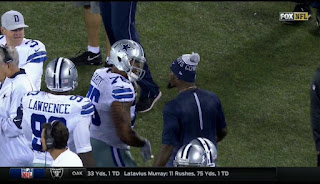 Will Greg Hardy Ever Get It?
There is no doubting the talent that Greg Hardy has and I have no doubt that he will be given a couple more shots in the NFL even if things don't pan out in Dallas as he would have hoped.

As a Football player Hardy is amongst the very best at his position.

But off the field he is struggling to really understand what is expected of him and I do wonder if he can keep the hand off the self-destruct button.

I am not overly concerned that he was seriously pissed off that Dallas had given up a Special Teams Touchdown after tying the game with the New York Giants. But getting into an argument with Dez Bryant looked unseemly, and that was exacerbated by the video of him slapping Rich Basaccia's clipboard, that is Special Teams Coach Basaccia.

Childish games with the media after the game won't help his cause either and I do think Hardy needs a lot of support to understand how to improve his public image after last year's alleged domestic abuse issues. Comments about Tom Brady's wife, terms like 'guns blazing' and then this latest problem doesn't make for a good look for Dallas even if the Cowboys continue to support their player.

Talent will get to the NFL, but it won't be enough to keep Hardy there if he cannot escape the controversies that have plagued him through College Football and into this point of his career.


Top Ten
1) Green Bay Packers (6-0): The Packers remain the best team in the NFL and they should come back healthy from their bye and ready to prove that on the road in Denver.

3) Carolina Panthers (6-0): The Panthers could easily have been flat against the Philadelphia Eagles off a big win in Seattle, but Carolina keep winning.

4) Cincinnati Bengals (6-0): Cincinnati didn't do anything wrong in their bye week but I think Carolina have done just enough to overtake them. Big game at Pittsburgh in Week 8 upcoming.

5) Denver Broncos (6-0): Now we will see what the Broncos are all about as they host the Green Bay Packers.

6) Arizona Cardinals (5-2): Arizona held on to beat the Baltimore Ravens and remain the favourites to win the NFC West.

7) Atlanta Falcons (6-1): They struggled to beat Tennessee in Week 7, but that was a non-Conference game off a Divisional loss which can be difficult.

8) Minnesota Vikings (4-2): A definite contender for a Play Off spot in the NFC.

9) Pittsburgh Steelers (4-3): Yes, they lost last weekend, but Ben Roethlisberger is back and this is a very dangerous team going forward if they can keep Big Ben healthy.

10) New York Jets (4-2): Another team who lost in Week 7, but the New York Jets showed enough on the road at the New England Patriots to consider them a genuine Play Off contender in the AFC.


Bottom Five
32) Tennessee Titans (1-5): This is a team that is struggling mightily with injuries and could be in line for a top two Draft Pick for the second season in a row.

31) Detroit Lions (1-6): The Lions were back to losing games last week having broken their season duck in Week 6. Average team with Jim Caldwell on a very hot seat as Head Coach.

30) Baltimore Ravens (1-6): This is not a team that is used to being as bad as they have been this season.

29) Jacksonville Jaguars (2-5): Finally made the trip to London worthwhile by winning their first game in three shots at Wembley Stadium.

28) San Francisco 49ers (2-5): They had a players only meeting to try and fix the big issues they are having. Could be another team looking for a new Head Coach at the end of the season.


Week 7 Picks Recap
It is a real disappointment to see three straight losing weeks to drop the season totals from the strong start they have made. I was fortunate it wasn't worse when the New York Jets kicked a 55 yard Field Goal to cover against the New England Patriots with just eighteen seconds left in that game.

I completely mis-read the Indianapolis and Miami games with both of my picks in huge holes by half time in those games, but then again I should have had more luck with my two underdog picks in Pittsburgh and Dallas. Both had their chances to win outright, let alone cover, but missed both aspects to drop the week into a negative.

More frustrating was looking at my shortlist and the picks I didn't make which ended up being on the right side- earlier on in the season I was finding the right teams so the last three weeks have to be considered a failure.

The season total is still very much in the positive, but I want to end this three week losing run in Week 8.
Posted by Dav Aulak at 18:17