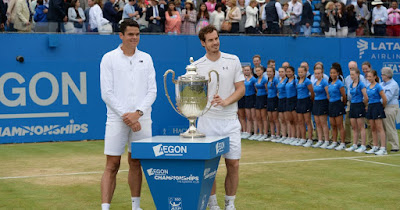 The two favourites to reach the Wimbledon Mens Final were Roger Federer and Andy Murray when the Semi Finals were played on Friday, but Milos Raonic crashed the party to become the youngest Grand Slam Finalist from the mens side of the draw since 2012.

Milos Raonic served very big and looked strong at times, but his win over Roger Federer will be seen as one that the seven time former Champion will regret. There is no doubting that Federer was the superior player through the first four sets, but he somehow blew the fourth set when serving at 40-0 to take that set into a tie-breaker and it was clear that Federer felt that was the match turning moment.

It certainly felt like that as Federer had not faced a break point since the fourth game of the first set and he had created nine break points of his own, albeit only taking the one. Some perhaps felt Federer was saying goodbye to Centre Court for the last time, but his interview after the match suggests this was a tournament in which he has already surpassed expectations.

I just hope Federer hasn't hurt himself with a bad fall in the fifth set and he can get back to full health for the rest of the season. We are not expecting to see Federer back in action until the Canadian Masters later this month and he is looking to represent Switzerland at the Olympic Games, and I just hope there is no negative news out of the fall after earlier having a bit of work done on the knee.

For Milos Raonic it was a big victory, but I am not ready to believe the Canadian is going to be amongst the leading contenders to win Grand Slams in the coming few years just yet. There has been an improvement in his game, but Federer let him off the hook in this Semi Final and I still think his limited return game isn't good enough against the very best players on the Tour on a consistent basis. Even if Raonic was to win on Sunday, I would expect him to be over-rated in coming matches rather than someone who is ready to step up alongside the elite players on the Tour.

In that Final he meets Andy Murray for a repeat of the Queens Final from a few weeks ago. Murray was very strong in his win over Tomas Berdych and he has to know he won't have a better chance of adding to his Grand Slam trophy collection. That can produce nerves, but the good news for Murray is that he has won the title at Wimbledon before while his opponent won't have the vast Grand Slam Final experience that the likes of Roger Federer and Novak Djokovic could fall back upon against Murray.

Andy Murray - 4.5 games v Milos Raonic: Anyone who watched the Queens Final will remember Milos Raonic was a set and a break up against Andy Murray before the latter turned things around. That might give Raonic plenty of belief that he can get the better of Murray on this surface, but I am not so convinced especially if Murray can begin to get a read on where the serve is going as he has in their recent matches.

They also played a memorable five set Semi Final at the Australian Open which Raonic was leading 2-1 before falling away, but there has been a common trend in their recent matches. It was Raonic who had won three of their first five matches, but Murray has won five in a row since the last of those losses in March 2014.

The trend I am talking about isn't the run of losses, but the fact that Murray has found a way to get better results behind his serve in each of those until the Queens Final. In November 2014 Raonic won 33% of points on the Murray serve, but has then won 28%, 25%, 23% and then 26% in the Queens Final.

Murray is one of the players on the ATP Tour that can get plenty of balls back in play even against the biggest servers, and limiting what Raonic is able to do against his own serve should open the door for him in this Final. You have to think Murray will take a little speed off the first serve to make sure he gets plenty of those in play and he will believe he is the better player when the rallies move past four shots, even in the return games.

Pressure can do a funny thing as Murray will have plenty of expectations on his shoulders going into his first Slam Final as the favourite. However I think the way he played in the Semi Final suggests he is comfortable with his position and Murray will believe he will be able to diffuse the Raonic serve. I also don't think Murray will miss the opportunities that Federer created in his Semi Final defeat to Raonic and I believe Murray has the variation and the smarts to force Raonic into making awkward volleys throughout this contest.

I simply don't buy that Raonic can win a Slam with his limited return game and he was barely involved in Federer's service games until the final game of the fourth set and the fifth set. Murray has kept Raonic at arm's length on his service games in recent matches against Raonic and I think he will be too strong for him on the day, forcing a few breaks of serve to make sure he can cover this number.

I am expecting Murray to come through in three or four sets and I will back him to cover this number of games on his way to a second Wimbledon title.