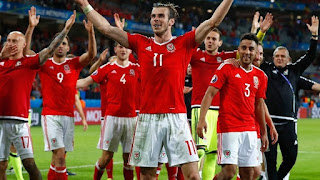 Euro 2016 Semi Final Picks
How good were Wales in the Quarter Final win over Belgium? Coming from behind against one of the favourites to not only win, but win convincingly, has to have given Wales the confidence to go on and try and surprise everyone by winning Euro 2016.

It won't be easy with the three remaining teams favoured above Wales, but Chris Coleman's men will be full of belief and think they have the best player left in the tournament in Gareth Bale.

Portugal haven't looked good for any consistent period through the tournament, but they have a fair bit of tournament experience, while France and Germany will believe the winner of that Semi Final will be a strong favourite to win the title here.

I am hoping we are still going to have three quality matches to come in France as this tournament is fast approaching a conclusion and the focus can shift back to domestic action which is a little over a month away from beginning in England.


Wednesday 6th July
Portugal v Wales Pick: Some might have labelled this as a match between Real Madrid team-mates Cristiano Ronaldo and Gareth Bale, but both Portugal and Wales will feel their run to the Semi Final has been thanks to many other players in their squad. Bale has at least scored three times and set up the goal that won the game against Northern Ireland, but Ronaldo has yet to truly fire outside of a very good performance in the 3-3 draw with Hungary in the final Group game.

Wales have looked the better team in the tournament as they have won 4 of their 5 games in Euro 2016 and goals have been flowing in this side. The loss of Aaron Ramsey is a big blow though and I don't think Wales have a replacement that can reach the levels Ramsey produces which might actually give Portugal the edge in this contest.

That edge will be reduced if Pepe is unable to play as Portugal have not always looked their best defensively and both teams should feel they can create chances in this one. Portugal will be desperate for Cristiano Ronaldo to rediscover his touch in front of goal if they are going to get through and perhaps even win their first game in normal time in the tournament.

Ronaldo has two goals, but he has missed plenty of good looks through the tournament. He had at least two big chances missed against Poland which would have settled the game before penalties, and also had chances against the likes of Iceland and Austria which he would usually gobble up.

I think Ronaldo will have chances in this one and I think he could be inspired by seeing his Real Madrid team-mate on the other side of the pitch. The ego Ronaldo has means he won't want to be missing the chances he has in case Portugal are defeated and people begin talking about a passing of the torch moment to Gareth Bale.

Even without Ramsey, Bale should have success in this game running against a Portugal defence that has looked panicky when teams have had a concerted go at them. It is unlikely Wales will want to sit back after their stunning performances against Belgium in the Quarter Final and they showed they can expose vulnerable defences in that win.

This should be a very good game of football to watch as I think both teams are better going forward than they are defensively. My lean is towards Portugal having a little more quality than Wales, especially as the latter are missing Ramsey, and I think Ronaldo is due another big game for his nation.

However I think there is more reason to back at least three goals to be scored in the game with these teams combining for 4 clean sheets in their 10 tournament games. Both teams have shown they can create chances and I think better composure in front of goal from Ronaldo will help matters and open up this Semi Final.


Thursday 7th July
Germany v France Pick: The talk in the France camp is of revenge as the players look to beat the Germany team that beat them in the World Cup Quarter Final in Brazil. That was a tight game which was decided by an early Germany goal through Mats Hummels, but the defender is one of three key players that will be missing for this Semi Final.

Hummels joins Sami Khedira and Mario Gomez on the sidelines and Germany may have to go back to the 'false nine' system that wasn't working as effectively as they would have liked earlier in the tournament. The pressure is on Joachim Low to find the right balance to attack a vulnerable France defence, but also make sure Germany are not too exposed against a French attack who have scored at least twice in 8 of their last 9 games.

Home advantage is a big key for France in this Semi Final and I think they are a team that might be rounding into form. A question for Didier Deschamps is whether he has the conviction to continue playing the attacking style that has helped France recover from 0-1 down against the Republic of Ireland to win that game and also dismiss Iceland convincingly.

That attacking style has seen Olivier Giroud partnered by Antoine Griezmann and the latter has responded by scoring goals in the last three games. You would feel if France give this a go, they should be too strong for the World Champions who have lost the spine of their team.

Germany have proven they can keep clean sheets which makes them hard to rule out, but I think France will have the edge and I think the hosts get through to the Final in normal time.