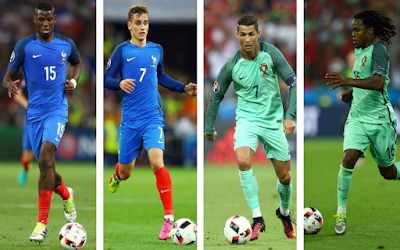 After a month of football at the European Championship, Portugal and France are the two remaining teams that have a chance of winning Euro 2016. There should be confidence in both camps that they can take the title home and both have plenty of recent experiences of reaching the business end of competitions to fall back upon.

Well that experience will come through some of the players on the field and the staffs off the field as both Portugal and France have plenty of younger faces in their starting elevens. For Portugal this tournament might have come a couple of years too early as they blend in some of their new talent with the older heads like Pepe and Cristiano Ronaldo, while France had been preparing for Euro 2016 prior to the last World Cup.

You do have to feel that France are the better team and plenty of other nations that have already gone home will feel they could have beaten Portugal. However the likes of Iceland, Austria, Hungary, Croatia, Poland and Wales have failed to do that and now Portugal get to play in the Final where anything can happen on a given day.

It would still be a big surprise if Portugal are able to win the tournament based on the form they have displayed in France, while the hosts have the stand out result in beating the World Champions Germany in the Semi Final. Wins over Romania, Albania, Republic of Ireland and Iceland were expected, but France were seen as the slight favourites against Germany and had to ride their luck at times in the first half to eventually see them off.

I am hoping for a good Final on Sunday, but France have dominated Portugal in recent times with eight wins from ten games in ninety minutes, and the two exceptions both came in European Championships with France winning both in extra time. Over the last two years these teams have met twice and France came out winners in both friendly games and will go into the Final as the favourites which should not be a surprise to anyone.

Portugal v France Pick: The Euro 2016 Knock Out Stage looked lopsided after the Group Stage had been completed, but the favourites to win the competition have made it through to the Final from the bottom half. Being the hosts meant France were heavily backed prior to the tournament and they looked to have the perfect balance to go all the way.

That expectation will have increased having seen France see off World Champions Germany in the Semi Final on Thursday. That victory might have been a little fortunate as Germany were missing key players and looked the better team right up until the controversial penalty was given to France in first half injury time.

Antoine Griezmann tucked that away and scored another in the second half to help France through, but now the team have to re-focus and not think the title is all but theirs going into the Final. That would be a dangerous mindset because France haven't always convinced defensively and will be facing an opponent in Portugal and Cristiano Ronaldo who will believe they can create chances.

The key for Portugal has to be to defend well and try and make it a nervy atmosphere in Paris the longer they can keep France at bay. Portugal have looked fairly compact in their last three games, but this is the biggest attacking threat they have faced so it won't be easy to prevent France from scoring as the latter have managed at least two goals in nine of their last ten games.

If Portugal can 'spoil' the game for the first half, they might feel they can get a few set pieces to try and exploit the France nervousness which will seep down from the stands to the players. That is the best way for Portugal to try and win this game in my opinion and I simply can't see them being able to contain a very good France attack for long enough.

An early goal for France would really up the pressure on Portugal and I think they would then cruise to victory, but early goals have been an issue for the hosts. They have scored five first half goals, but four of those came against Iceland and one was deep into injury time against Germany.

Eventually you have to think France have enough attacking, creative players to exploit spaces they do find and I think they will be too much for Portugal. I would love to see Cristiano Ronaldo add an international title to the host of club titles he has won in his career, and he won't get a better chance than here, but France have looked the superior side through Euro 2016.

I was expecting France to go off at odds on to win this match in ninety minutes and I would not be surprised if that is the case come kick off on Sunday. Backing the hosts to underline their success in Euro 2016 by picking up the trophy on Sunday at odds against looks too good to ignore and I will back France to do that.

MY PICK: France to Win @