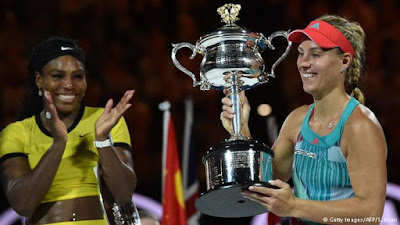 For the second time in 2016, Serena Williams and Angelique Kerber will compete for a Grand Slam title. The first time obviously ended with a huge surprise as Kerber managed to hold her nerve and prevent the Serena charge in the final set having dropped the second and so she will have belief she can win this one.

Beating Serena Williams on the faster surface at Wimbledon is a big task though and the World Number 1 will go in as a big favourite to finally bring home her 22nd Singles Grand Slam title and her first since winning the title here last year. A Semi Final defeat at the US Open to Roberta Vinci followed by Final defeats at the Australian Open and French Open here might have dented some of the aura around Serena, but she remains the best female player in the world when bringing her best to the court.

Angelique Kerber is yet to drop a set in this tournament and she has a couple of very solid wins in the last two Rounds behind her, but the German will know she has to be even better if she is going to double her Grand Slam titles in seven months.

Serena Williams - 4.5 games v Angelique Kerber: On first glance this does look a lot of games for Serena Williams to cover considering she was beaten by Angelique Kerber at the Australian Open and might have a slight mental block to overcome as she looks to match Steffi Graf's record of 22 Grand Slams in the professional era.

Losing both Grand Slam Finals played in 2016 as well as in the Semi Final at the US Open last September will have an affect, even on someone who has been as successful as Serena Williams. We are not watching robots, but human beings with real emotions and it is hard to ignore the fact that she has come up short in the last two Slams when going in as the favourite to win those matches.

Of course Serena should be favourite and I think she has peaked at the right time to win the Wimbledon title for the seventh time in her career. Her serve wasn't working as well as it can when she faced Kerber at the Australian Open, especially the first serve, but that part of her game looks to be in perfect condition and the courts here suit her serve very much more then in Australia.

That isn't to disrespect Kerber who has one of the best defensive games on the WTA Tour and who won't allow Serena to play her serve followed by a big forehand winner game. Kerber's defensive skills should affect the way Serena approaches the game as she might look to hit closer to the lines as soon as possible which might extract more mistakes, while Kerber will also look to make her play one more ball which can also lead to mistakes.

The Kerber serve is still one of the weaker parts of the German's game and that can be exposed on this surface. She might have beaten Venus Williams in straight sets, but Kerber was regularly in a bit of bother on serve and that is going to be the case against an aggressive and more consistent Serena Williams. Attacking the second serve should give Serena Williams a chance to dictate the points and get Kerber on the run.

On the other hand, Kerber has to try and stretch Serena out with the American not the greatest mover these days. It limits the power Williams can produce coming back when making her hit on the run, although I do think Serena is in the kind of form that will make it very difficult to get her out of her rhythm.

Kerber has to play better than she did against Venus Williams when she was aided by plenty of mistakes from the older Williams sister. Those are not coming as frequently from Serena Williams and not many players can say they have beaten her twice in a row with the World Number 1 someone who admits she recounts every loss she has had.

Serena Williams would only be 3-3 covering this number of games in her previous six Wimbledon Final wins, but she had covered in three in a row before last year. Even that match against Garbine Muguruza saw the Spaniard break in the second set to edge closer to Williams who had led 6-4, 5-1 before being broken twice.

Those nerves could prevent Serena covering here, but I think she will be looking for some revenge against Kerber and having lost to her in Australia should keep the mind focused even if in a commanding position. Only seven women have ever beaten both Williams sisters in the same tournament and I am not sure Kerber can make that number eight here.

As much as I respect the German, I think she will come up short in this one as Serena Williams uses her power and the conditions to come through 64, 63 and tie Graf's Singles Grand Slam record.