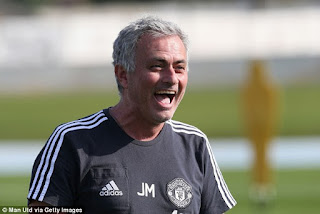 It's been a tough road since that loss to Manchester City with a League Cup Quarter Final loss at Bristol City and some poor dropped points in the Premier League meaning Manchester United have two trophies they can realistically win (assuming most think the Champions League is a realistic aim) and being dragged back into a top four battle.

While obviously disappointed with some of the results over the festive period, there is no doubting that Manchester United have taken a big step in the positive direction under Jose Mourinho in his second year at the club. Mourinho's history of achievement in his second year at previous clubs might have gotten the fan base a little over-excited at the start of this season with talk of a Premier League title challenge, but that wasn't accounting for how far United were behind Manchester City when Mourinho and Pep Guardiola took over their new positions at the end of the 2016 season.

In a normal season the United record would have certainly had them in the mix for the Premier League title, but it's been difficult when Manchester City have won 18 straight League games and pulled clear in a similar fashion to what Chelsea did last season.

And that is why I feel more positive than negative- I see a Manchester United team improving and another big summer transfer window will see the gap closed even more. I also like the fact that Mourinho is challenging the board to not only make the one big flashy signing, but pushing them to really back him in the transfer market.

In a day and age where Liverpool have just spent £75 million on a central defender and Barcelona have spent £142 million on an attacking player to replace one that was sold for £200 million it has become clear that Manchester United have not spent enough money. A really poor squad was taken over by Mourinho and you can see the improvement when you look at the starting elevens that have played this season compared to the ones Louis Van Gaal had been picking in his final season.

I'm hoping that will be the case in the summer, but the current squad certainly has the capabilities of having a deep FA Cup run and finishing in the top four in the Premier League. Some of the silly points dropped over the festive period will have frustrated everyone connected with the club, but the football has tended to be good to watch and Manchester United certainly look more capable than last season of maintaining the spot in the top four.

That is likely to be a fight to the finish with little separating United in 2nd place and Arsenal in 6th although The Gunners may soon be out of contention if they lose Alexis Sanchez in this transfer window without replacing him. In reality I do think it will come down to three out of four teams with United, Chelsea, Liverpool and Tottenham Hotspur all closely matched.

That game at Wembley Stadium against Spurs looms large for Manchester United at the end of the month and so it is important the momentum from the Everton win is taken into the home games with Stoke City and at Turf Moor against Burnley. Both should be winnable fixtures with Stoke in disarray at the moment and Burnley having lost to both Spurs and Liverpool over the festive period at home.

However it is not about how the fixture looks on paper and it is up to the players to show they are big enough to compete in the Champions League again next season. With the injuries in the squad beginning to clear up, Jose Mourinho has more options now and I am hoping United can put a strong January in the books.

I am not one to go overboard by transfer rumours which come thick and fast in January before the media has a break ahead of the bullshit-o-meter being ramped up again in May ahead of the summer transfer window. This week it was Lucas Moura from Paris Saint-Germain who has been the name most frequently linked with a move to Old Trafford and it may not be a bad one if United can get him for the right price.

More interesting was the link with Alexis Sanchez, although I will be very surprised if Manchester United have made a move for a player who looks pretty determined to move to Manchester City. I have a feeling someone close to the player has leaked the rumour in the hope that Manchester City will increase their bid and sign the Chilean now rather than wait for his contract to expire in June.

At the time of writing Jose Mourinho has not had his weekly press conference, but suffice to say he will be asked about Sanchez and I am expecting the manager to dismiss the link out of hand. More important is likely going to be the comments Mourinho makes about Antonio Conte describing him as a 'little man' in what has become a very personal war of words between the two managers.

There are three Premier League games to be played in January, but also one FA Cup Fourth Round tie and the television companies have stitched up the match going fans once again.

No one will surprised that the Yeovil Town tie has been picked to be broadcasted, but to move the game to a Friday seems unbelievably wrong. It's a 4 hour drive from Stretford down to Yeovil, without traffic, and is asking those going to the game to have to take extra time off work rather than the game being played on a Saturday afternoon.

The club won't mind having a few extra days to rest for the Premier League clash against Tottenham Hotspur, but it's those who wish to travel to support the team who are affected negatively.

It's been a big reason I have never liked the idea of Friday night football in England where fans travel in far greater numbers than in most European Leagues. However the television deal and all of the money invested means there isn't a lot to do about it and the next TV deal will see the 7:45pm Saturday games come into play which will mean more headaches for those who want to follow their teams at home and away.

Hopefully United will have a good remainder of January to back up the wins over Everton and Derby County and perhaps we will be treated to some transfer activity if the rumours are to be believed. After a tough December when we fans perhaps were disappointed with the results, United look to be on the right road and there are more positives from the first half of the season than there are negatives.

Picking up 7 points from the next three games against Stoke City, Burnley and Tottenham Hotspur and progressing in the FA Cup would give United plenty of momentum for when the Champions League gets going again too. I am feeling good about this season, although it is finely balanced at the moment, and I am looking forward to what is coming up with plenty of big games set to get going.
Posted by Dav Aulak at 00:28