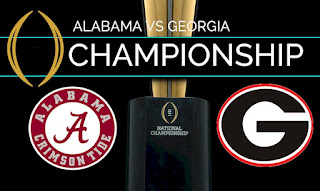 The SEC is going to provide yet another National Champion, but it will be interesting to see if the Conference Champion Georgia Bulldogs can knock off an annual National Championship contender in the Alabama Crimson Tide. The Crimson Tide didn't even win their Division this season, but they have been credited for their body of work by being allowed into the College Football Play Off and they are favoured to win the National Championship.

The Crimson Tide dominated the defending National Champions Clemson Tigers in their 'Semi Final', while the Georgia Bulldogs came from a huge deficit to knock off the Oklahoma Sooners. The more convincing performance definitely came from Alabama, but injuries continue to decimate the team and the Georgia Bulldogs are good enough to take advantage.

Much of the game will be decided on the line of scrimmage as the Bulldogs look for their strong Running Back duo to try and get the better of an Alabama Defensive Line which have been stout all season. If the Bulldogs can open some holes, Sonny Michel and Nick Chubb will feel they are able to gain big yards when hitting the second line of Defense as Alabama are down to second and third string Linebackers.

Alabama will try and control things up front and prevent those holes being developed, but I do like Georgia being able to make some big plays. Much could also depend on Jake Fromm at Quarter Back who has to make the Crimson Tide Defensive unit respect his ability to make plays through the air, but I do think the Bulldogs will have success in this one.

The same can be said for Alabama from an Offensive point of view, especially as they should be able to run the ball effectively in this one. The Georgia Defensive Line have had some problems stopping the run in recent games and Jalen Hurts is also a Quarter Back who is able to make plays with his legs which could cause problems for the Bulldogs.

The Georgia Secondary have played well and they do get some pressure up front, but they may not be able to rattle Hurts who is capable of making plays while looking after the ball. Hurts takes criticism but he isn't someone who will lose the game for Alabama and that could be all important in this National Championship Game.

An 'X factor' in this game could be Head Coach Kirby Smart who spent a long time on the staff under Nick Saban including at Alabama prior to becoming the Head Coach for the Georgia Bulldogs. There has to be some familiarity of the systems which can be passed onto his players and Smart should know the best way to slow down the Crimson Tide Offensive unit, although it will be a tough task for Georgia anyway.

At the moment all the money is also on the Crimson Tide to win another National Championship under Nick Saban. The public are also behind them, but I think the Georgia Bulldogs can be backed with the start on the handicap here.

I think the Defensive injuries for the Crimson Tide could give Georgia the chance to make some big Offensive plays. The two Running Backs should be able to give the Bulldogs a chance to win what could be a low scoring game as the teams chew up the clock behind their Offensive Lines.


It should be a close game and Georgia may just earn the upset to take home an unexpected title.