There was a time in recent years when being a boxing fan meant having to defend the sport from those who had begun to like other forms of combat sports.

The best were simply not fighting the best and so those stars who could be recognised outside of the sport were perhaps lacking compared with years gone by.

Without a doubt the sport has been moving with a positive trend over the last couple of years and it feels like 2018 will be another really strong year in the ring.

We are getting more unification fights, some big grudge fights and also seeing boxers prepared to take the risks with their careers to further their legacy rather than there to protect an unbeaten record. It is great news for the fans and already in 2018 we have some huge fights lined up before we hit the halfway mark of 2018.

The World Boxing Super Series has been a success so far as the fans have really fallen in love with the tournament bracket style and seeing the best fight the fight. The Cruiserweight Semi Finals come up first and who is going to back off from watching those and then we will get to see the Super-Middleweight Semi Finals including the one that everyone in the United Kingdom should be looking forward to when George Groves meets Chris Eubank Jr in Manchester in the middle of February.

The Finals of both events take place in May and there should be at least six very good fights to look forward to in the next five months.

Add in the increasing interest in the Heavyweight Division where both Anthony Joshua and Deontay Wilder continue to be on a path that will lead to one of the biggest fights that can be made in 2018. Both have decent looking fights in March as Joshua takes on Joseph Parker in a unification fight just three weeks after Wilder has taken on the dangerous Cuban Luis Ortiz.

Tyson Fury is also set to return having put his UKAD issues behind him and set to be given a new license by the British Board of Control to resume his unbeaten career. Dillian Whyte, Lucas Browne and Alexander Povetkin will be hoping to line up to meet Joshua at some point this year too and we also get to the see the grudge rematch between David Haye and Tony Bellew which is scheduled for early May.

That is set to occur on the same day as the Canelo Alvarez and Gennady Golovkin rematch with Billy Joe Saunders and Danny Jacobs hoping to fight the winner in September.

New stars are being made and there could be some epic fights between the likes of Mikey Garcia, Vasyl Lomachenko, Jorge Linares and perhaps Terence Crawford.

And last, but not least, there is the increasing hope that this is the year we will see Kell Brook and Amir Khan finally settle their differences in the ring.

It's easy to forget we are only in January and yet another strong year of Boxing looks to be on the cards, one where I hope there is a little less controversy attached to the very big fights.


On Saturday it is the first big event of the boxing year when pound for pound king Errol Spence Jr continues trying to blaze a path through to a unification with Keith Thurman. So far Thurman has not wanted to know at all, but Spence Jr is someone who looks capable of clearing out the Division and forcing Thurman to have no where left to move.

Chief support on the card comes from Robert Easter Jr who is an unbeaten fighter at Lightweight who is avoided by the majority of fighters in his Division. He will be looking to make sure he continues to give the other Champions no where to go too and both Easter Jr and Spence Jr come in as big favourites despite facing a couple of hardy professionals. 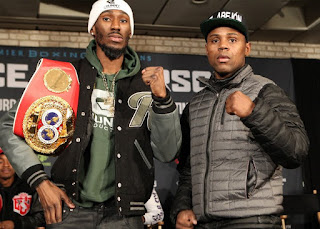 Robert Easter Jr vs Javier Fortuna
The fight is going to happen on the undercard of the Errol Spence Jr and Lamont Peterson card and that is despite Javier Fortuna missing the weight limit.

It is a strange situation to see Fortuna miss weight considering he had never fought higher than 135 before, while his suggestion it was something to do with the cold weather in New York is... just plain weird.

Not many people will be lining up to face Robert Easter Jr who makes weight comfortably but has some very tough physical attributes to deal with. He is a tall fighter at almost 6 foot despite being in the Lightweight Division and it is no surprise that none of the other Champions really speak about Easter Jr as someone they would like to face sooner rather than later.

The resume has a couple of decent enough names on it, but Easter Jr is trying to make it hard for the other Champions to continue to avoid him. His win over Denis Shafikov last time out is the best win for Easter Jr and I think he is going to use his size in this one to jab and keep Fortuna at arm's length.

Will Easter Jr perhaps take a few risks as the fight wears on to earn the stoppage? I am not too sure about. I actually think he would be happy to keep this fight at the tempo he likes and try and frustrate Fortuna behind a long jab and the 8 inch arm length advantage has to be one that Easter Jr will look to make full use of.

Fortuna is a decent fighter and the southpaw stance can cause problems, while he was winning his fight with Jason Sosa on the cards before being stopped. However Easter Jr doesn't lose too many Rounds and I can see him take control in the second half of the fight with my biggest issue perhaps being a corner pulling out Fortuna if the fight is beyond him at that point.

I think the first half of the fight will be close enough to mean Fortuna is allowed to push for a win until the end of the 12 scheduled Rounds. I can see Easter Jr keeping Fortuna at the end of the jab to put a few more Rounds in the bank though and I am expecting the American to be given the Decision in this one. 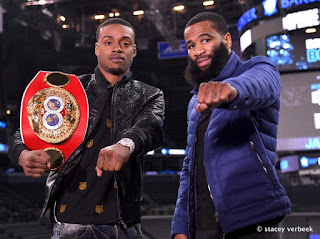 There should be plenty of eyes on Spence Jr these days with many considering him the pound for pound king alongside Terence Crawford since Andre Ward retired. Spence Jr himself is very willing to prove himself, but has struggled to entice some of the bigger names in the Welterweight Division into proving that he is the man to beat at this weight.

The win over Kell Brook on the road cannot be underestimated and Spence Jr makes his return to the ring for the first time as he begins to chase down Keith Thurman for a huge unification fight between two unbeaten fighters.

Spence Jr is not someone who overlooks opponents though and he seems a calm character who will take it step by step until he gives Thurman no where left to turn. That fight is likely to be made in 2019, but Spence Jr has to keep winning and getting the fans pushing for him to entice Thurman into what could be the stand out fight next year.

For now Spence Jr will concentrate on Lamont Peterson who is a tough opponent, but one expected to be a level below what the younger man can bring to the ring. Peterson has proven to be a durable opponent with only one stoppage on his resume in three career defeats.

No one will be critical of losses to the likes of Timothy Bradley, Lucas Matthysse or Danny Garcia, especially when you think how close he came to taking away Garcia's unbeaten record. Peterson has also beaten Amir Khan in a controversial Decision and this is a man with plenty of confidence in his own ability, even if I think ultimately Peterson has come up short at the very top level where Spence Jr resides.

Peterson had to give up the WBA World Welterweight Title so he had a chance to take this fight and he won that the last time he was in the ring in February last year. That is some lay off for Peterson and I think this is going to be a step above the level that Peterson can produce.

Spence Jr has spoken about tough this fight could be and I certainly think it will be very competitive early on as he works out what Peterson is trying to do. They do know each other well so it might be a little quicker for Spence Jr to figure it out, but I think he will have to break Peterson down and I am not expecting him to rush through this opponent like Matthysse did.

Instead I can this fight developing like the Kell Brook fight with Spence Jr did- that is namely that Spence Jr will perhaps have a few issues early on, but will make the adjustments and by the mid-Rounds he will begin to exert his control. I will look for Spence Jr to break Peterson down in the second half and eventually have his punching power tell as either the referee or the corner pull out the older fighter.

The last nine Spence Jr fights have ended with a stoppage and I think the accuracy and power will be telling again as he becomes only the second person to prevent Peterson hearing the final bell. There is no doubt that Spence Jr has the power to end this fight early, but I think the most likely time is around Round 8 or 9 as he wears Peterson down so I will back a second half stoppage here.