I mentioned last week ahead of Errol Spence Jr's first defence of his IBF Welterweight Title that there has been some excellent fights already signed off in the first half of the 2018 year.

Showtime came out with an event to highlight some of the fights they have arranged earlier this week and adding Erislandy Lara versus Jarrett Hurd and Adonis Stevenson vs Badou Jack to an already loaded calendar is only good news for the Boxing fans around the world.

That ahead of the two Finals which are set for May to continue the trend for big time Boxing fights in 2018. 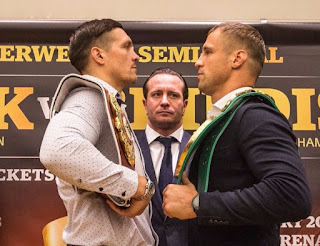 Oleksandr Usyk vs Mairis Breidis
Some are suggesting this Cruiserweight Semi Final is effectively the Final with the winner likely to go forward as a big favourite to win the tournament in May.

In saying that, Oleksandr Usyk is a very big favourite to see off Mairis Breidis despite having to travel to the unbeaten Latvian's home for this fight.

Both fighters are unbeaten and bring a belt into this unification which looks like it has the makings of a really good fight, but the edge has rightly been given to Olympic Gold Medalist Usyk. He looks to be the superior boxer and has the size and awkwardness of being a southpaw to give Breidis some tough looks and I am expecting the Ukrainian to be able to pick off his opponent.

The superior boxing is a big advantage when you think of this match up and I also think Usyk may carry a little more power than Breidis despite the latter being a big hitter himself. I mean you can't ignore the fact that Breidis knocked out Manuel Charr who has recovered to win the WBA Heavyweight Title since then and that shows the Latvian is able to produce the goods.

However their mutual opponent in Marco Huck saw Breidis beat him in a Unanimous Decision a few months before Usky was able to stop the German in the World Boxing Super Series Quarter Final. It is Usky who also holds the higher KO percentage and I do think he will be able to load up and produce some punishing shots in this one once he has Breidis perhaps feeling sorry for himself after being out-boxed.

Both men have spoken about making a statement, and you can understand why with the other Finalist also going to be an unbeaten Cruiserweight Champion. For Usky this tournament is a chance to announce himself to a wider audience before looking to make the move up to Heavyweight which is almost certainly to come if the Ukrainian can Unify the Cruiserweight belts.

Breidis will be dangerous early in the fight and I think Usyk will look to out-box the home hope and frustrate him. The Ukrainian is the bigger man and should be able to use that to dictate the tempo of the fight, but I also think he will begin to unload his combinations in the second half of the fight once demoralising his opponent.

That is where I think Usyk will be able to either force the referee to step in or the Breidis corner to withdraw their man from taking a lot more punishment. There is power in the Usyk shots to force the stoppage and I think he will be looking to underline his dominance of this fight by making sure he doesn't leave anything to chance by going to the scorecards.

In reality I think the majority of people would expect to see a Usyk Unanimous Decision and there are some suggestions that the former standout amateur will not take risks until he is fully convinced his opponent has lost some belief in the work he is doing. That won't be enough to take into the Heavyweight Ranks although I do note the two previous unbeaten fighter Usyk has taken on have been the two who have avoided the stoppage defeat.

I just don't think Breidis is going to want to run and slowly work to a points defeat. If things are not going his way I think the unbeaten home fighter will take risks and that could see him at the wrong end of something big delivered by Usyk.

The punching power of Breidis has to be respected too, but Usyk can take away his heart in the first half of the fight and I am going to back him to earn a stoppage late on.