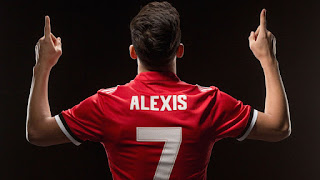 United Corner- The Arrival of Alexis Sanchez (January 27th)
I refused to get carried away when the news first broke that Manchester United were interested in signing Alexis Sanchez from Arsenal in the January transfer window.

It was almost universally accepted that Sanchez was going to Manchester City either in this window or on a free in the summer having seen the move to the Etihad Stadium pulled from underneath him in the summer transfer window in 2017.

But then the story developed.

And Manchester City pulled out with the 'financial package' one they were not prepared to pay and that opened the door for Manchester United to bring in one of the best players in the Premier League.

What a transfer and the right choice to take over the famous Number 7 shirt which had been left vacant to be filled by a name of the magnitude of Alexis Sanchez.

This was the player I wanted United to bid for when he was leaving Barcelona in the same summer the club spent more to bring in Angel Di Maria from Real Madrid. At the time I thought Sanchez was the better fit at the price and the style of play, although Di Maria was also a player I admired, and it turned out to be the case with Sanchez thriving in the Premier League and Di Maria lasting just a single season before moving on to Paris Saint-Germain.

But now finally United have their man and I have to say there are so many positive feelings about the transfer. Alexis Sanchez is the kind of special player United have been missing in the final third, someone who can change a tight game in an instant with a brilliant pass or a fine shot and the Number 7 shirt is fitting for him.

I have little doubt Sanchez is going to be a success at United and now I am feeling glad that Chile have missed out on the World Cup, purely for selfish reasons. I do enjoy watching Chile play, but they, and Sanchez, haven't had a summer off for a number of years due to World Cups, Confederations Cup or Copa America commitments.

Sanchez can help United achieve big things in the second half of this season, but I am looking forward to a rested and settled Sanchez taking off next August as a stronger bid to win the Premier League title will be expected of the side.

Sanchez can also play in the Cup and I don't see any downside to this deal with the obvious talent the Chilean brings to the squad.

I am sorry that Henrikh Mkhitaryan had to be sacrificed to get the deal done, but it had become clear that our midfield Armenian didn't have the full temperament to play for Manchester United. I think he will thrive in the less pressurised atmosphere of playing for Arsenal, but the expectations of Manchester United wore heavy on Mkhitaryan's shoulders and he was almost certainly going to be leaving in the summer.

To swap him for Sanchez was an absolute no-brainer as far as I am concerned.

The big question most Manchester United fans had in the cold light of day once the excitement of the Sanchez transfer was completed was where Sanchez was going to play- Jose Mourinho has made it clear that he feels Sanchez can play anywhere in the front four of his favoured 4-2-3-1 system, and I don't agree with the critics of the deal who suggest the Sanchez signing is a hindrance to some of the young players in the squad.

The most notable is Anthony Martial who has been in stellar form this season and looks to have seen off Marcus Rashford as the starter for Mourinho on the left of the three chief supporting players to Romelu Lukaku. That left side has been an effective position for Alexis Sanchez and neither the Chilean or Martial are as comfortable on the right, but I still believe both will be accommodated in this team.

Ever since it was becoming clear that Sanchez would be arriving at Old Trafford, my feeling has been he will chiefly play in the 'Number 10' spot in the team with some creative license from there.

Jesse Lingard has been playing fantastically well in that position, but I do think Lingard is going to be shifted to the right side which remains the real problem position for United. I would expect Lingard and Mata to fight for that place, while Martial and Rashford battle for the left side.

Rotation will play a factor, but I imagine if all of the players are available to Jose Mourinho then his team would look like this:

In big games where Mourinho wants an extra body in midfield it may be Martial sacrificed to be used as an impact player with Sanchez moving over to the left. The counter attacking options are improved too as Mourinho could choose to use Sanchez up front with Martial and Lingard in support in those games and use Lukaku as the impact player instead if United need a goal.

For me this makes Sanchez an excellent signing to give Mourinho the options he is craving and I really can only seeing this being a successful signing for the side.

There has been one negative around the Sanchez deal but it is one being pushed by the media and nothing to do with the player being signed. This whole situation of it being a decision to win trophies or sign for money when it came to signing for United or City is laughable.

I must have been asleep during the time that Manchester United have stopped being the most successful English club and one that is clearly improving. Yes City are ahead at this moment in time, but I honestly think United have as good a chance to win the Champions League and with one more transfer window I would expect Mourinho to get us much closer to the leaders next season.

The other element of the deal was the way the fees have been reported- I am not sure when the media started reporting deals including every cost because it sounds like United are paying millions while Arsenal are paying nothing to have Mkhitaryan arrive (who has become their highest paid player by all reports).

Liverpool just paid £75 million for Virgil Van Dijk to Southampton, but I didn't see a report mentioning how much all his wages and agent fees and signing on bonuses were going to cost them over the course of his contract? I can imagine it will be much closer to a £140 million deal if reported the same way as the Sanchez deal.

But you know what, that won't matter if Mourinho can create another United versus the World atmosphere around the club. That has proved to be very successful in the past and this is the kind of signing that will put all the ABUs on notice that Manchester United are taking another step back towards the top of the English and European game.

United certainly look to be making the right moves and I just hope Mourinho is backed again in the summer transfer window to really get things right at the club. His new contract to extend his time at Old Trafford keeps the positive vibes coming out of the club and hopefully United can back that up with a couple more big results to end the month of January.

The signing of Alexis Sanchez could be a catalyst for a really strong end to the 2017/18 season and then a rested Sanchez can help Manchester United produce a huge Premier League title push next season.

A special player wearing a special number is what has been missing at United in the last few years and I am looking forward to seeing Sanchez with the famous red shirt on.
Posted by Dav Aulak at 11:08