This week we have another World Boxing Super Series Quarter Final as we are almost set for the Semi Final line up which will see those fights arranged for early 2018 ahead of the Final in May/June.

It is a big week ahead as most Boxing fans in the United Kingdom have to be hoping that Chris Eubank Jr and George Groves can get through their fights to set up a huge Semi Final which should capture the imagination of the fans. Both won't be looking ahead to that potential Semi Final, but the war of words have already begun and I can only see a heated build up between those two.

I am expecting both to make it through with Eubank Jr having his Quarter Final fight this Saturday.

On the same day we have a big domestic dust up between Anthony Crolla and Ricky Burns with both fighters coming off losses and perhaps at a crossroads in their careers. Everything points to a really good fight assuming both Crolla and Burns have something left in the tank and this should be another decent evening of Boxing for the fans. 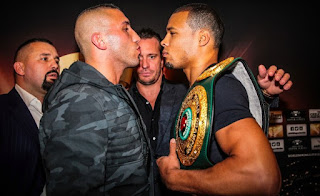 You can't argue with the reasoning as Avni Yildirim hasn't really got a deep resume to look at and his biggest wins have come against fighters that are way past their prime. The biggest was the Decision over Glen Johnson, although the latter was a long way past his best when they fought in 2015.

Beating an old Aaron Pryor on a Decision is another 'stand out' win for Yildirim and I think the best you can say about Mr Robot is the rumours about how he did in sparring against James DeGale earlier this year. Yildirim apparently gave DeGale all he could handle in those sessions, but I am not sure how much stock you want to put into those sparring sessions.

It is always a little different in a real fight and I think Chris Eubank Jr will have too much speed and skill for what looks like a slow, come forward fighter that will allow the British fighter to show off what he has in the ring. I fully expect Eubank Jr to have the flashier moments and I can only see Yildirim winning with a special punch, but I am not convinced he even has that in the locker.

Eubank Jr is not really a one punch Knock Out artist, but the accumulation of shots can wear down opponents and he will know Yildirim is likely to be in front of him throughout this fight. I can see Eubank Jr breaking down his opponent and perhaps showing enough flash and combination punching to force a late stoppage although much will depend on how much punishment Yildirim's camp want their boxer to take.

I am not at all convinced about Eubank Jr's claims he is the best fighter at this weight in the world, because I simply think he hasn't really taken on many challenges in his professional career to warrant those statements. His biggest fight was a loss to Billy Joe Saunders and I have not been convinced by the level of opponent since then.

He is always seemingly linked to the big names like Groves, DeGale, Gennady Golovkin or a potential rematch with Saunders, but those have yet to materialise. Win this and Eubank Jr could be in line for some big fights in the first half of 2018, and I think he can find a way to earn a late stoppage over an opponent who will likely plod forward and help Eubank Jr look very good. 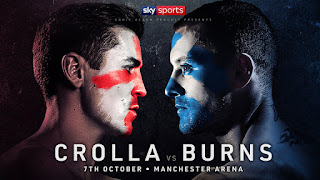 Anthony Crolla vs Ricky Burns
Both Anthony Crolla and Ricky Burns are off big World Title losses and it does feel like the fighters are at a crossroads in their career with the winner maybe earning another World Title shot and the loser perhaps seriously considering retirement.

It does feel like that for Ricky Burns a lot more than Anthony Crolla with the Scottish fighter having a lot of miles on the clock and approaching his 35th birthday. Burns is a three weight Champion and is coming off a one sided loss to Julius Indongo, but he has shown he is a tough, tough man and looks to be the naturally bigger fighter.

Having to come down to the Lightweight level is a concern for Burns and the ease in which he managed to do that is going to be all important in this fight. If it wasn't a bad training camp, Burns has the tools to give Anthony Crolla all he can handle, but if it has taken something more from Burns then you would expect the home fighter to come on strong.

Everyone should have a lot of respect for Crolla who came back from what liked like a career ending injury when trying to prevent his neighbours from being robbed. He didn't just come back to boxing, but Crolla won a World Title before two losses to Jorge Linares in which he found the truly World Class level too hot to handle.

I like Crolla and I always wish him the best because of what he has come through and he does come across a really nice guy. However I do question how good Crolla actually is when you think a couple of his more recent wins have come by stoppage when he was down on the cards.

Stopping Burns has proven to be too much for some top fighters, including Terrance Crawford, and I am not sure Crolla can do that unless the weight cut has hurt the Scot. Burns comes across too professional for that to be the case and I like the reach advantage and the solid jab Burns can put out there to help the underdog here.

Stopping Crolla is also proven to be a very difficult task and Burns has never really had the concussive power to think he can do that now. This does look like a really close fight that will come down to the cards and I do think Burns has every chance of earning the Decision on the night.

It may be a Split or Majority Decision in what should be a fantastic fight where both styles mesh wonderfully on the night. A small interest in Burns winning this one on the cards has to be worth taking if you think he has anything left in the tank, as I do believe Burns has, and I am looking forward to this one.