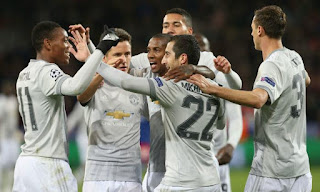 United Corner- A Stunning September (October 4th)
Prior to the start of the season I mentioned that I thought the fixture list had given Manchester United a real chance to make a very strong start to the Premier League season. It was also a test for the squad to show how much they have learned in Jose Mourinho's first season as manager as Manchester United wanted to show they could put some of the weaker teams to the sword.

I asked for at least 19 points from the first 21 available if Manchester United were genuinely a title contender and that is exactly what has been produced.

But it is the manner of the points secured that has to be pleasing all Manchester United fans with some special performances rewarded with plenty of goals scored. All of the attention has been given to Manchester City for the fives and sixes they scored in September, yet United have only scored a single goal fewer after hitting four against Crystal Palace, the fourth time in seven League games that Manchester United have hit that number.

They've managed to do the same in the Champions League and also in the League Cup, but the result I am perhaps most proud of is the 0-1 win at Southampton.

Manchester United were not at their best that day and really had to batten down the hatches, but those are the kinds of performances and results which really do have players and management believing they can go all the way. It is something Manchester City have not had to to yet, but there will be moments in a long season when teams struggle to find their best and they have to find a way to win and Manchester United have shown they can do that.

The absence of Paul Pogba has not been the major problem I felt it may be, although it would be nice to have the Frenchman back sooner rather than later. While the team is not 'better' without him, Jose Mourinho has found the right formula to keep them ticking forward even if I do miss the presence of a footballer who is willing to carry the ball forward much more than Nemanja Matic and Marouane Fellaini who had made up the two without Pogba.

Fellaini has been in fine form covering for the Frenchman, but there are bigger tests ahead for both the midfielder and Manchester United in general, although I will come back to that.

With the Premier League in a good place, we can only be positive about the start made in the Champions League with Manchester United looking like they could have the Group won before the start of November. A move through to the League Cup Fourth Round is another positive in what has been a very strong August and September for Manchester United.

However I do feel that for all the positive feelings Manchester United are giving me at the moment that the points earned are still only a 'par' score for a club looking for a title challenge.

Some will point out that Manchester United have earned 8 more points from those games compared with the corresponding fixtures last season, but United finished twenty-four points from the top in the 2016/17 season so I am not sure that doesn't prove my point as to 19/21 points being a par from the fixtures United have faced.

Against those same teams United have faced this time around, Chelsea earned 16 points from a possible 21 last season and so I don't think I am being harsh to suggest United are on track and not exceeding expectations just yet.

The next month is certainly going to tell us a lot more about where Manchester United are as they face trips to Liverpool, Huddersfield Town and Chelsea in the Premier League as well as a home fixture against Tottenham Hotspur. Those are a tough set of fixtures with the Champions League double header against Benfica and the League Cup tie at Swansea City also to come between the international break in October and the one in November.

It is in those games against three of the top four from last season where Manchester United are likely to miss Pogba's presence the most. That makes it a big challenge for Mourinho to find the right tactics to win earn results from those fixtures especially with the likes of Phil Jones and Romelu Lukaku also carrying knocks.

Those fixtures are the kind where you can really begin to see if a team is the real deal as a title challenger or not and Manchester United come straight out of the international break into a trip to Anfield to show what they have. I'd be happy if United can produce 8 points from a possible 12 and just stay with Manchester City who look to have a much more manageable set of fixtures at the same time and the clear rival for the Premier League crown.

Earning those points will be far from easy, but I actually do believe in this Manchester United squad. The loss of Pogba is a pain, but Mourinho should be able to pick a strong enough team to earn some positive results even if the games at Anfield and Stamford Bridge will be tense for the players and the fans.

Both Liverpool and Chelsea have issues of their own to contend with and I do think Manchester United have played well enough to earn a result, but it is the big test that the club have yet to face in the 2017/18 campaign. Win these games and the belief will increase tenfold that this is a special season in the making, but defeats and there will be questions for Mourinho and the players to answer as to how much they have improved from last season.

Earning 8 from 12 will be far from easy, but making a positive start at Anfield will give United the momentum to do that, especially if they can expose a vulnerable defence and win there in the big game out of the international break.

Overall we all have to be very happy with what we have seen from Manchester United and it really has been a lot more positive leaving Old Trafford than for much of the last four years. That is testament already to the work being done by Mourinho and there is an excitement from fans heading into the ground and leaving after another really strong performance.

That has been missing under the poor David Moyes and Louis Van Gaal years, while last season it was more frustration as so many teams were able to hold on for draws at Old Trafford. Now this looks a team who can wear down opponents, but importantly take advantage of the chances being created, and we all have to be pleased with how things have panned out.

I am more confident about this squad than I have been for many years, but I also appreciate that the games between the next two international breaks are going to be telling. While quietly confident about Manchester United's chances in those games, I know it won't be easy and will be a real test for the squad, but if we want to be Champions we have to start showing it hasn't just been a kind fixture list which has sparked the positive run.

It's a big month ahead, and one I am looking forward to.

There was one other piece of news about Manchester United which took a few headlines over the last month and that was regarding the chant about Romelu Lukaku.

Let's face facts, it was a pretty crappy chant and I am not one who is going to singing about another man's penis, but I guess that's just me.

The question was about whether it was a 'racist' chant- while I don't think anyone singing it thought that way, it is based on a stereotype which would offend and so it wasn't appropriate. That is not to say fans can't sing about edgy things, but this was over a line.

It actually reminded me of The Office from over fifteen years ago when David Brent is telling a joke that is using the same stereotype the Lukaku song was.

David Brent couldn't understand why the joke was seen as offensive, and I really wouldn't want to be in the same boat as Brent and almost twenty years later.

I do think most fans would not have really been keen on the song if the headlines hadn't made such a fuss and the chant would have disappeared fairly quickly. However that gave it new life for a week or so, although I didn't hear any airing of it on Saturday in the win over Crystal Palace which hopefully means this simply crap chant is put away for good.

I don't really want to finish on that negative when it has been such a superb September overall.

I will be keeping my fingers crossed the United players can all return from their international duty fit and ready for another busy month of football and hopefully Manchester United can get their next set of fixtures going with a positive result at Anfield. It's ten more days before United are back and I will be counting down the days for what has always been the one game I circle when the fixtures list come out in June.
Posted by Dav Aulak at 18:45