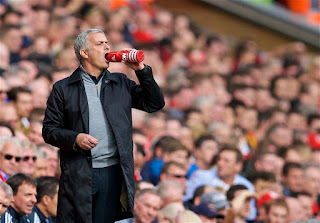 United Corner- Mourinho's Detractors Out in Force
What did people really expect from Manchester United's trip to Anfield?

I was more surprised that so many were 'shocked' and 'upset' by Jose Mourinho's tactics in the first game out of the international break, especially when you could almost select the first eleven which started the game (maybe Anthony Martial over Marcus Rashford was the only real surprising choice).

Don't get me wrong, I would have loved for Mourinho to have come out all guns blazing and take the game to Liverpool, but that is the heart speaking and not the head. Essentially I have been saying for over twelve months to anyone who may care that Liverpool are a team you need to contain for the first half hour, especially at Anfield, and then try and pick them off and you could see from the Mourinho tactics the manager felt the same.

Heck, even Bryan Robson had said the same thing at a Q&A I attended the day before the trip to Anfield so I was not at all surprised that Mourinho's first thought was to make sure United didn't fall behind too early and then need to chase a game where Liverpool could hit them on the break.

That was achieved thanks to some quality goalkeeping from David De Gea, but this is where I think the criticism of Mourinho for 'parking the bus' from some in the media, as well as some United fans, plus from the opposite manager has been used as a smoke and mirrors attempt from Jurgen Klopp.

For all the perceived 'negative' tactics that Mourinho supposedly employed, Jurgen Klopp seems to be given a pass because he looks like a cartoon character.

I mean has everyone glossed over the fact he took off his three first choice attacking players for the likes of Daniel Sturridge, Alex Oxlade-Chamberlain and Dominic Solanke...

Those were like for like changes as Klopp was just as concerned in wanting to avoid a defeat as Mourinho was, yet the 'story' goes that the Liverpool manager is this attacking stalwart who has been denied by a negative defensive manager who simply didn't want to win the game.

During the second half I was convinced Liverpool were going to try and take the game to United by taking off one of their midfield trio, move Coutinho into that space and bring on another attacking player. I mean Klopp suggests his team were doing all the attacking so why not take that risk and go for the win?

Instead Klopp decided he didn't really want to risk going for the three points and lose the game, something which actually went against Mourinho's thinking as he had brought on pace for the counter attack into spaces he thought would be there when his opposite number went for the win.

So the game petered out and it is Mourinho who takes all the criticism for the performances, while Klopp continues to be this proponent of attacking football. It's a nonsense when you actually sit down and look at the way the two teams approached the game and the substitutions made, while this myth about Sir Alex's 'free flowing' football continue to be peddled by the media.


It was Craig Bellamy who was the latest to try and tell United fans what is, and what is not, acceptable in the brand of football being played. You could almost forget that only Manchester City have scored more goals than Manchester United this season or the fact that United have 6 more League goals than Tottenham Hotspur and 8 more than Liverpool and Chelsea.

Sir Alex himself was playing plenty of 'pragmatic' football in his later years at Manchester United and trips to Anfield were not that much fun over the last few years under his watch.

Yes I did want United to try and get further up the pitch, but I think the Liverpool tactics didn't help and when two teams are happy to take a point then this is the kind of game you get.

The only difference seems to be that Jose Mourinho's 'negative' image is the one that gets bandied around the papers while others can throw in a 'boom' every now and then and are beloved for it.

Manchester United also added another three points in the Champions League with a vital win at Benfica during the week and it was another game that was perhaps not the free flowing games the fans have become used to this season.

But it was job done and we have to be happy about that.

During the course of a long season there will be the peaks and troughs in level of performance and the key is to find a way to win when not playing at your best. It didn't happen at Anfield, but I don't know when gaining a point from that ground was considered such a 'negative' result, while the win at Benfica was a case of doing enough and preserving some energy.

The big games keep coming for United with a trip to Huddersfield Town followed by a home game against Tottenham Hotspur and then what is likely to be a tetchy affair at Chelsea. A home game in the Champions League against Benfica can confirm United's place in the Last 16 of that competition before the trip to Stamford Bridge.

I expect the League games against Spurs and Chelsea to be tight affairs as most of the fixtures against the top teams will be, but I think United have to be looking at coming away with at least four points against those two teams.

Don't be surprised if Mourinho does play a similar tactic at Stamford Bridge to the one he used at Liverpool, although Antonio Conte will likely get a pass if he uses the same system he did against Manchester City and the game does not ignite like the neutrals and pundits would love to see.

At this stage of the season I am simply looking for United to keep in touch with those lot across Manchester but I won't be criticising Mourinho if he makes sure we are solid and hard to beat in the fixtures coming up. That will give United the platform for success as some of the injuries clear up to once again provide rotation for the manager.

It is a big month before the next international break, but one I am confident United can negotiate with success.
Posted by Dav Aulak at 11:34