The next Anthony Joshua event is ready to go, but I have to say that the overall feeling about the fight card this weekend is underwhelming when you think where we were in April at Wembley Stadium.

I understand AJ is a huge star for Eddie Hearn and Sky Sports, but they can't be really be suggesting this should be a PPV fight. Unfortunately Joshua has transcended the sport and that means I would be surprised to ever see him on a non-PPV event again, although the undercard looks pretty terrible too.

It is not all the fault of Hearn or Sky simply because of the injuries that have affected the card, but this is a PPV that is priced at double that of Gennady Golovkin vs Canelo and I am not sure there is much value for money on the one being shown on Saturday.

I will still watch it, but I won't be paying myself. Instead I will go out to a bar, have a few beers and watch the two fights of real interest for me which both come from the Heavyweight Division.

On Friday we also have the final Quarter Final in the World Boxing Super Series although it is perhaps one of the weakest of the Quarter Finals in what has been a real revelation of a tournament so far. This will set up the final of the four Semi Final fights to come in January and February 2018 and will be an interesting night in Germany. 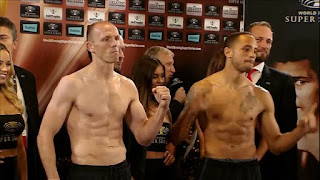 Juergen Braehmer vs Rob Brant
Both the Super Middleweight and the Cruiserweight World Boxing Super Series have been such a success already that there are plans for other weights to follow suit at the end of next year. Some top boxers have already expressed an interest to being involved next time around and so all credit has to be given to the organisers for putting together a tournament that looks like it will succeed where the Super Six World Boxing Classic did not.

In saying all that, this might not have been the best of the Quarter Finals.

Out of the Super Middleweight tournament, the other Quarter Finals had boxers involved that are considered amongst the favourites to win this tournament, but this one doesn't seem to have the same appeal.

Juergen Braehmer is coming down from the Light-Heavyweight level and was last season calling it a day against Nathan Cleverly over a year ago. There are questions as to how much he has left in the tank and whether this is just a last chance saloon fight for the veteran German.

On the other hand Rob Brandt is an unbeaten American prospect who is coming up in weight from Middleweight to take part in the tournament. This is clearly the biggest test in his career having won his previous twenty-two fights and I am really not convinced the winner is going to have enough to beat Callum Smith in the Semi Final.

Brandt may have a little more room for improvement than Braehmer at this stage of their careers though and I do think the American can step up and make a statement in this Quarter Final. It can be hard to really believe in a prospect, but I am not sure Braehmer has much left having been out of the ring for twelve months.

Perhaps he shows off his veteran experience early in the fight, but I expect Brandt to take control of the fight in the latter stages. I think he may have enough to force the stoppage against an opponent who may struggle to keep the energy going at this weight and I will back the American to see either the corner or the referee end this contest in the second half of the fight. 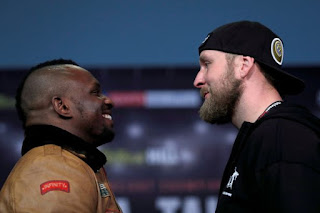 Robert Helenius vs Dillian Whyte
I think a lot of credit has to be given to the promoters that Dillian Whyte is positioned where he is in the Heavyweight ranks and I don't mean in the official World Rankings but by the casual fan.

Some people genuinely think Whyte is ready for the World level, but I can't say I agree with them just yet.

He went life and death with Dereck Chisora who has been shown to be a step below the World level and I honestly think the push for Whyte to face Deontay Wilder is being fuelled by Eddie Hearn. I think Hearn would expect Wilder to win that fight and thus set up a mammoth fight with Anthony Joshua for all the marbles at some point in 2018, but Whyte himself really believes he belongs.

He is rough and ready and will be an awkward fight at times for anyone, although I do think it will be an upset if he picks up one of the main Heavyweight titles. Perhaps Whyte would be better suited to chase Joseph Parker and try and bring a World title to the table in a unification with Joshua rather than searching for the fight with Wilder.

In saying that, I do think Whyte beats Robert Helenius in this one on Saturday. Remember Chisora lost a controversial one to Helenius a few years ago and the Finn has not really improved much from that point and also seen his undefeated record taken away. Back then many thought Chisora had done enough to win the fight, and this time Helenius won't be getting home judging to bail him out.

Helenius was stopped in his loss and Whyte is expected to put him down for the count in this one. That is the most likely outcome of this one as I am not sure Helenius has much left in the tank, although I am also not convinced Whyte is blessed with the power to beat someone without wearing them down first.

Maybe that is the way he takes down Helenius in this one, but I think the bigger man can try and keep Whyte at length with his jab. The rough house tactics of Whyte may impress the judges more than Chisora did in his own loss to Helenius, and I think there may be something in taking Whyte to win this one on a Decision.

Whyte has stopped three of his last five opponents as he rebuilds after the loss to Joshua, but he needed 10 Rounds against Ian Lewison, and also went 10 with David Allen as well as 12 against Chisora. Maybe he gets Helenius out there late, but I will look for Whyte to record a Decision win here. 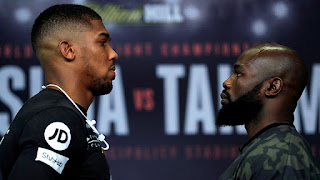 Anthony Joshua vs Carlos Takam
You can't blame the PPV company in promoting Carlos Takam as a real threat to Anthony Joshua, but I can't see him upsetting the big favourite coming as a replacement.

I fancied Anthony Joshua would have been too much for Kubrat Pulev, but neither fight was going to get the blood pumping as the April win over Wladimir Klitschko did. That's no concern for Joshua who continues to be the golden child of British Boxing who will know some big fights are coming in 2018 as long as he keeps the focus.

This should be a fight in which he keeps things rolling regardless of what he is saying outwardly.

AJ has been speaking about the toughness of Takam and how this could take getting into the Championship Rounds before he can take out his opponent. Takam is tough, but I won't read much about him going the distance against Joseph Parker as he was stopped by Alexander Povetkin.

Takam has some solid wins behind him, but I am not sure how much he could have prepared for this one regardless of what Eddie Hearn mentioned about having him getting ready in case Pulev pulled out. I do think Takam will show heart but most will be wondering how long he can last in this one.

That is what I am considering as I do think Joshua will find a way to get this stopped.

I will credit Takam for likely giving this his best shot considering he is unlikely to ever have such an opportunity again. I do think Takam can make things awkward, but Joshua hits very, very hard.

Whyte and Dominic Breazeale both lasted into the 7th Round against Joshua and I can imagine the latter not looking to rush this one. Both Whyte and Breazeale were ended in the 7th Round... Takam may get to around the same mark and having a small interest in this one finishing anywhere between 7-9 looks to be worth backing.