I have ended in profit for the last couple of years, but the win-loss ratio needs improving to really start piling up the numbers. That is the key for the upcoming year, although Boxing has proven to be a sport which offers some very nice prices on outcomes once you look beyond the simple outright markets where you do tend to get some very heavy favourites week to week.


There are going to be some big fights in the year ahead and the biggest may be the potential two bouts Tyson Fury and Deontay Wilder will be competing in. The first of those is definitely scheduled for this month and the outcome by decide whether we need to see another later in the year, while the Heavyweights under the Matchroom banner are all going to be in action before the midway point of the 2020 year.

A couple of those potential fights are intriguing, but I think some of the biggest bouts that can be put together come from the lower weights and hopefully 2020 is going to be the year we get to see those.


On Saturday it is the return of Kell Brook having been out of the ring for fourteen months, while Gary Russell Jr insists he will increase his activity in 2020 as he comes out in February with plenty of time to schedule another bout in this calendar year.

The cards in Sheffield and Allentown are not that deep, but it is the start of the Boxing Picks for 2020 and hopefully a positive start to come. 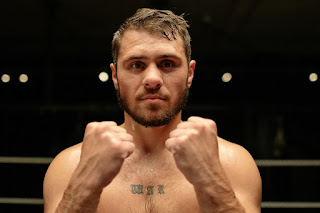 David Allen vs Dorian Darch
A short lived retirement is over for David Allen who returns from his disappointing defeat to David Price back in July.

Once again the White Rhino is looking to put some momentum behind his career, although I am not convinced he should continue fighting after hearing his comments after the defeat to Price.

However it is up to Allen and if he thinks he is ready to come back and compete at a certain level I am not so concerned. I don't want to see him in with opponents who completely overmatch him again and he should be focusing on trying to pick up the British Title (as long as Daniel Dubois isn't Champion) and then call time on his career.

His comeback opponent looks a perfect one as Dorian Darch has long been nothing more than a journeyman. The Welshman has lost six in a row and he has been stopped in all of those with none of those bouts seeing out the Second Round.

It would be a surprise if this one is any different even though Allen is not really known as a big puncher. Very few of his fights have been stopped early, but I am not sure Darch has much left these days and if Allen can put together a couple of big punches he should be very comfortable on the day.

This has the feel of a comeback fight for David Allen and backing him to win in either the first two Rounds is an odds against shout I am happy to back. 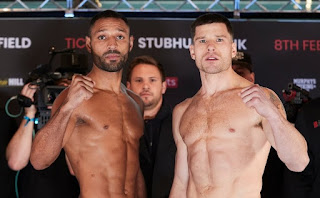 Kell Brook vs Mark DeLuca
He looks fit and healthy, but there are still some real questions that Kell Brook is going to have to answer on Saturday in what might be the last time he fights in Sheffield.

Fourteen months have passed since Brook was last seen in the ring as he struggled to beat Michael Zerafa- that win didn't look so bad when Zerafa went on and beat Jeff Horn in August last year, although the latter has since gained some revenge in a Decision win.

Ring rust has to be a concern, but Kell Brook is back in the Ingle gym and he looks like he has put in the hard graft.

This is a big step up for American Mark DeLuca who has a decent 24-1 record, but with nothing standing out on his resume. From largely domestic level DeLuca is heading to Sheffield to take on a former World Champion and I am not happy when I see some of the body language he has displayed in the last week of the fight.

The final face to face is not always a great indicator of how a fighter is feeling, but DeLuca breaking eye contact and wanting to move away from Brook is not a good look no matter how much you feel that is going to be a factor.

Kell Brook does know he has to make a statement and I do think the potential ring rust could be a concern. The fight is likely going to see Brook come out pretty fast and I do think we will learn much about DeLuca very early on and how much he is going to be willing to take in this one.

The Michael Zerafa performance does raise some concerns, but I think Brook will come out ready to make a big time statement.

This should be a chance for him to do that against an opponent who is not half as good as Zerafa. Mark DeLuca has a big chance to announce himself on the world scene, but I am not convince he believes he can do that and backing Kell Brook to win in the first half of this bout.