It has been a long time since we have seen a Heavyweight Fight of the kind of stature as the one we are getting on Saturday night from Las Vegas.

Things always seem to feel that much more important when an American fighter is the 'A Side' of the event, but Tyson Fury is more than just a hyped up European Boxer and he could be the very best of this generation.

Deontay Wilder will have something to say about that and anything like the first fight will set up a potential trilogy this summer in exactly the manner we would want to see.

You can go to my Instagram page to see a video that captured THAT moment in the Twelfth Round and the link to that is here. 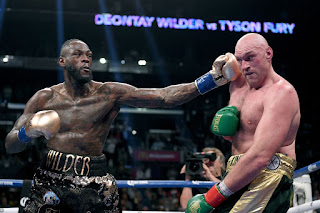 Deontay Wilder vs Tyson Fury 2
This is essentially a 50-50 pick 'em and I can't argue with that at all.

There is a real case that can be made for either Deontay Wilder or Tyson Fury to have their hand raised at the end of this rematch, but I think it makes a lot of sense for people to either believe it is going to be a Wilder KO or a Fury Points Decision.

The intrigue has really been built up from the first fight when Fury largely outboxed the American WBC Champion, but it was Wilder's power that scored two Knock Downs and eventually the Draw on the cards. I thought Fury had done enough to win the fight to be honest, but it wasn't a massive surprise when a Split Decision Draw was announced.

A third fight has already been signed off so I don't think we will see that same kind of controversy this time, but it is interesting to hear that Tyson Fury wants to change his tactics as much as he says he does. Some of that is down to mind games and I would not be shocked to see him box and work his way to another Decision, but the weight put on is suggesting Fury has not be making things up.

Deontay Wilder is also a lot heavier as he looks to hold his own in the clinches and perhaps just avoid being sapped by the weightier Fury in those up close and personal moments.

I've always felt that the second time an elite fighter would get to see Tyson Fury they would be much better prepared for what is an amazing style for someone as big as the 'Gypsy King' is. You really can't figure that out when just watching the tape, but I do think Deontay Wilder is going to be better for having had that first fight and the fact he managed to force Fury to hit the canvas twice in the last four Rounds is telling for me.

Of course I do think Fury will be better having been much more active now than when the first fight was signed, and I am not reading too much into the last two performances as he feels like a Boxer who will be better against the better competition faced.

However you can't ignore the 47 stitches he needed after the win over Otto Wallin and I would not be surprised if that is a problem in this one. I would hope it is not the case, but Fury has not given as much time for that to heal as you would want.

A move in trainer and gym clouds things a little more as Tyson Fury says he wants to sit down on his punches and stop the Knock Out artist that is in front of him and it all just makes things as intriguing as you like.

This is going to be a big fight that I am going to enjoy- my gut feeling is that Wilder is going to find an answer in a fight that is either going to be controversial with the Fury cut reopening and seeing the referee/doctor step in, or Tyson Fury will be winning on the cards before Wilder finds the eraser of a punch which has seen him come through battles with Luis Ortiz over the last two years.

Either of those conclusions will at least keep people interested for a trilogy fight too, but I can't recommend either fighter here and instead will have a cold one and enjoy the entire occasion.

There is an undercard in place which is perhaps not as strong as some would have hoped.

Emanuel Navarrete is one of those on the undercard who looks like he could be the best fighter in his Division and will be searching for Unification fights to prove that. He might soon be going up to the Featherweight limit where more big fights would await, but on Saturday he should blow past his opponent without being overly taxed and the layers feel the same.

We will also have a crossroads fight at Heavyweight where Charles Martin, the fighter deposed as IBF Champion by Anthony Joshua, and Gerald Washington look to move back into a contender status. It is Martin who looks the more capable and I think he will win by stoppage against Washington who looks like he is not as confident in taking the big shots as his opponent may be.

I am not sure Charles Martin is as big a puncher as his 24 Knock Outs in 27 wins would suggest, but he has enough pop and I think he could get this done within the first six Rounds.

MY PICKS: Relax and enjoy the main event!