United Corner- Will Ole Gunnar Solskjaer Be Given Time? Should He? (September 26th 2019) 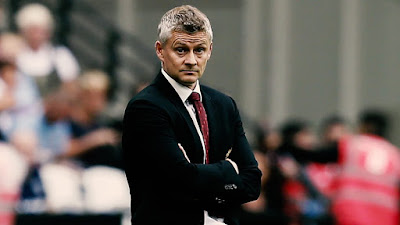 United Corner- Will Ole Gunnar Solskjaer Be Given Time? Should He? (September 26th)
Football is a results business and I do think that is still going to be a major factor at Manchester United for Ole Gunnar Solskjaer in what has been a poor start to the 2019/20 season.

Most Manchester United fans would have known it would take some time to get the squad rebuilt, but my fear is that the owners are trying to do that on a very cheap budget. A lot of faces have been removed from the squad, but you can't have serious ambitions when some of those are not being replaced and Manchester United's squad looks seriously thin in midfield and attack, issues that have been magnified by the injuries suffered to players in those areas.

The owners and CEO have not helped Solskjaer's cause and that is why I do understand the call for time, but ultimately this is coming down to blind faith in a manager who has not exactly pulled up trees in his previous jobs.

I will never lose my respect for Solskjaer from his days playing for Manchester United, but that can't be a reason to believe he can turn things around twenty years later as a manager. This is a club that needs to have those involved who can show they have the ability to develop the players they have, especially when the theory is that it is going to be a long-term plan to rebuild the squad, but I have not seen much from Solskjaer to suggest he is the man to do that.

Ever since being appointed the permanent manager of United, the results have slipped very close to the kind you would expect to see from a club being dragged into a relegation fight let alone one that is hoping to return to the Champions League. More away day woe at West Ham United on Sunday has increased the pressure and I have to question some of the decisions made by the manager.

Why would you play Marcus Rashford in the Europa League knowing Anthony Martial is still not ready to return to the squad? It surely played a part in the injury suffered by Rashford at the London Stadium, while I also have to question training methods that have seen so many of the players pick up issues in the first six weeks of the season.

It could be down to bad luck, but it leaves you scratching your head that Mason Greenwood would not have been used in the Number 9 to give Rashford some rest against the mighty Astana last week. I have spoken to people around me who think it was Solskjaer's way to build the confidence of the England international, which does make sense, but even that went wrong as Rashford missed a number of decent openings and then looked absolutely out on his feet almost from kick off on Sunday.

Ole Gunnar Solskjaer made it clear United had 'loads of options' in the forward areas so why didn't he use them all in that game against Astana and ensure United are not down to having no fit strikers at the club? Now they have to hope a 17 year old boy can come in and lift a team that has scored 16 goals in 17 games under his watch.

Of course missing the likes of Anthony Martial and Paul Pogba haven't helped, but United have long looked short of ideas in the final third which makes it all the more baffling that this was not an issue being addressed in the last transfer window. I don't blame Solskjaer for that- the club has made it clear that they are not going to invest the sums needed to really compete at the top of the Premier League- but I really don't understand the thinking of allowing the likes of Marouane Fellaini, Ander Herrera, Romelu Lukaku and Alexis Sanchez all depart and only bring in Daniel James to fill the gaps left in the squad.

That part is down to the boardroom and I won't blame Solskjaer for that, but his tactical decisions and substitutions are questionable to say the least. It is the main reason I can't really understand the blind faith many have in him, even if it does mean making yet another change in the manager's office, and the persistence in using players that are clearly not good enough means the whole idea of embracing the youth players is not exactly going to plan either.

I don't want the kids thrown in and suffering to be honest, but it does raise doubts about the 'loads of options' Solskjaer thinks he has in the squad. Maybe that is why his substitutions are tending to be as poor as they are, but we saw the same at the back end of last season with a deeper selection of players and it is hard to believe Ole Gunnar Solskjaer is going to get it right at Old Trafford.

I want him to, I really want him to, but that isn't going to be enough to get the job done. The top four does look really open outside of the top two, but Manchester United are no sure things with the performance levels where they are and where they have been for several months now.

The win over Leicester City out of the international break gave United and Solskjaer some breathing room, but the pressure has intensified again after Sunday's no show at the London Stadium. Games against Arsenal and Liverpool at Old Trafford are going to be very difficult and the away form since Paris means I don't have a lot of high hopes that Manchester United win at Newcastle United, Norwich City or Bournemouth in the next five weeks.

How has it come to this? Worrying about trips to St James' Park, Carrow Road and the Vitality Stadium? Yes the owners and the board are the biggest problems, but the manager can't just be allowed to oversee a season worse than the one David Moyes produced no matter how far we think United have fallen in the five years between the Moyes and Solskjaer eras at Old Trafford.

It would be a different story if United were creating a boatload of chances and showing the direction Solskjaer wants to take the club, but the football is back to the turgid rubbish we have seen for much of the time since Sir Alex retired. Right now it looks like a team that won't score goals and will struggle for a lot of clean sheets and that is a recipe for an unmitigated disaster.

I understand those who want to give Solskjaer two, three or even four windows to really mould the squad to his liking, but Manchester United can't finish 8th, 9th or 10th while we wait for improvements. Patience is one thing, but allowing a manager a 'Hall Pass' for months on end is not going to be the way any top club approaches things in this era.

Being manager of Manchester United does come with pressure and it is up to Solskjaer to get his players to respond and bounce back from the truly terrible display at West Ham United. I fully expect a win over League One Rochdale, but it is the game on Monday Night Football that is going to be telling and I would worry for Solskjaer if United were to go into the next international break with less than 4 points secured from their next two League games.

More and more questions are being raised about the suitability of a manager who has seemingly been given the permanent job at one of the biggest clubs in the world because of a honeymoon period and the fact he is considered a legend from his playing days. Personally I am not sure that is good enough to get United turned back around and my fears that Solskjaer was the 'easy' and 'cheap' choice to take over is coming back to bite United on the backside.

Hopefully I am made to eat those words with a strong set of results to take into the next international break, but I won't be holding my breath.


It was interesting to read the latest reports that the Glazer Family have accepted it is going to be a three year plan to restore Manchester United to the top of the table. Suggestions in the reports that they want to follow the Liverpool blueprint is not one I would disagree with, but Liverpool did follow the guidance of a manager who had won the Bundesliga with Borussia Dortmund and taken that club to the Champions League Final.

That is certainly a CV that can be trusted much more than Solskjaer's so I am not sure this report means the latter is safe as manager of the club unless results improve.

The other factor at play is that the Glazers seem embedded and unlikely to be going anywhere despite rumours that people out there are interested in purchasing Manchester United from them. It will take a monumental offer to change that and most businessmen are going to weigh up the pros and cons and figure they don't want to massively overpay for a club that still is holding a debt from the buyout in 2005 and who will likely need plenty of cash to invest in the playing staff to get things turned around.


I think we all have to accept it is some road back to being amongst the elite of English and European Football and we don't have to look too far from home to see how far United have fallen. While I can credit the implementation of a plan to restore the club to former glories (or at least credit the report that suggests such a plan has been made), I do worry about the competency of the likes of Ed Woodward and Matt Judge to actually put those theories into effect.

At the moment it all feels like one step forward, two steps back at Old Trafford.

The hope is that Ole Gunnar Solskjaer is going to start to put together a set of positive results that will put the malaise that set in at the end of last season and carried over to this one to the back of the mind. I don't advocate sacking managers months into their tenures, but I am also not going to believe for the sake of believing in someone who has not shown much in his managerial career to suggest that better things are around the corner.

Even if United finished outside of the top four but were playing good football and the development of some of the younger players was beginning to show I would say keep hold of things as they are. Ultimately it is going to be on the performances and results that a real feeling of any improvement will be judged and if they continue to slide as they have ever since Paris back in March, I can't help but think Solskjaer will need to be moved on.

Hopefully the next time I write something down about United we have just been on a run of five or six straight wins in all competitions, but nothing suggests that will be the case.

Then the question will have to change from Will Solskjaer be Given Time to SHOULD Solskjaer Be Given Time. At this moment I still want to back the manager as much as possible, but I'm losing faith in his ability and need some results to just pick up the belief once again.
Posted by Dav Aulak at 15:02