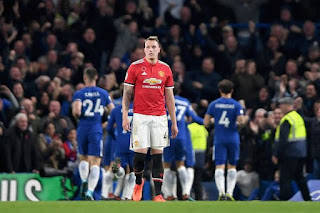 On paper it looked like October was going to be a challenging month for Manchester United and even though Jose Mourinho claims he doesn't speak about injuries, it has been clear that Manchester United have been missing the influence of Paul Pogba.

With Marouane Fellaini, Eric Bailly, Marcos Rojo, Pogba, Michael Carrick and Zlatan Ibrahimovic all missing time or still on the road back, the squad has been a little stretched especially in the middle of the park.

I do feel for Mourinho in that regard, but what was he thinking bringing on Nemanja Matic when leading 0-2 at Swansea City in the League Cup Fourth Round and knowing the Serbian enforcer was going to be needed for all of the other big games being played?

It has been something he has been criticised for in the past, but the added reinforcements coming this month may make it easier for Mourinho to use the rotation that is critical at this time of the season. Games against Basel, CSKA Moscow and Bristol City should be seen as an opportunity for players not considered first team regulars to be involved and I don't think the likes of David De Gea, Antonio Valencia, Phil Jones, Nemanja Matic, Paul Pogba, Henrikh Mkhitaryan and Romelu Lukaku need to be playing a single minute in any of those games.

The games come thick and fast and it has been an issue in the past where you have seen Mourinho teams run out of legs in the last couple of months, especially with the number of games that can be backlogged.

The results in October may have dictated the team selection as well as the injuries as Manchester United won 1 of 4 Premier League games. It was a below par effort simply because of that loss to Huddersfield Town and the defeat at Chelsea would have hurt a lot less if that had not been the outcome at the John Smith's Stadium.

With Manchester City laying down a huge marker, those three points lost at Huddersfield Town had to be made up elsewhere and that was the reason the defeat at Chelsea hurt as much as it did. 8 points behind City already looks a lot of points, but it is too early to panic and simply means the back to back Premier League games against Arsenal and Manchester City in early December are vital for Manchester United's chances of really putting a title challenge together.

Now I do feel United 'must' beat Manchester City to just knock them back a step or two and anything less will mean looking for other teams or luck to help close a big gap.

But that's for another day and for now Manchester United have to be looking to get into those games with some momentum. Home games against Newcastle United and Brighton followed by a difficult looking trip to Watford have to see Manchester United return with 9 points or I think the pressure will really be on Mourinho.

The Champions League is in hand so those games should not affect the team selection for the League games coming up and I do think anything less than 9 points might already mean looking for a top four finish than a title challenge.

The return of the likes of Rojo and Pogba will be huge for United though and I think they can give the squad the boost it is looking for. Pogba has been a huge miss in the middle of the park which has been most noticeable in the big games played, while Rojo seems to come off as something of a leader who can drive the squad forward.

Both have that influence and I do think United have a different look with both playing, although Rojo's position is perhaps less secure in the starting eleven than the Frenchman's. The Bailly/Jones partnership has been effective for Jose Mourinho so there could be a system change with three at the back to incorporate Rojo, or the Argentinian may be asked to play at left back where he is not at his best. However that position remains a problematic area for Mourinho and Rojo can fill in for six months.

Personally I would rather play Rojo back at centre half where he was so good for United prior to his injury. I don't dislike Jones, but I think Rojo is a better all around centre half than the England international although I am sure there are many that will disagree.

For me a Bailly/Rojo partnership was a key part of the success United had in the second half of last season and I would pair them up over the Christmas period.

My ideal United starting line up has not changed much from the start of the season barring the return from injuries and would look like this: De Gea, Valencia, Bailly, Rojo, Blind, Matic, Pogba, Herrera, Mkhitaryan, Martial and Lukaku in a 4-3-3 system.

Of course Mourinho may decide Rojo at left back and Jones and Fellaini are more important than Blind and Herrera, but there are options there once the squad is back to full health.

In fact reading into Mourinho's press conferences, I think his ideal team might actually involved Ibrahimovic back in the '10' position in a 4-2-3-1 which means Mkhitaryan isn't just pushed out to the right, but way not be the permanent fixture he looked earlier this season.

The left and right side of that 3 would be interchanged although I would begin with Martial and Mkhitaryan myself for the pace and creativity they offer.

But what of Marcus Rashford? I think Rashford is full of potential and he will continue interchanging with Martial on the left side of the three, but I also think there is more room for improvement than many others seemingly do.

His enthusiasm and confidence is a huge plus and I think that means he is someone who will take on board where he needs to improve and I am sure there are Coaches helping him along.

I would like to see a little more composure in the final third where Rashford can be hit or miss at times, while I do think he is yet to pick the right option when in the final third. There are times I would like him to pass and others when he hesitates to shoot, but that will come as it did for Cristiano Ronaldo in his development at Old Trafford.

The England man is definitely someone I like, but I do think he is yet to really cement a full time starting position in the Manchester United eleven. Over the next six weeks there are plenty of opportunities for Rashford to impress, I just hope he is beginning to figure out when to make the right decision in what has been a number of promising positions in the final third.


Thankfully the talking is over and the Premier League and Champions League are back this weekend. It was a tough few weeks, but the squad looks to be getting back to full health and hopefully the mood will be a lot better as we head into December and the two big Premier League games United open the month with against Arsenal and Manchester City.

That will be determined by the way United play against Newcastle United, Brighton and Watford, but I still have full belief in this squad and I can see improved performances to close out November.

We are not as far away as the press will have the fans believe and I think United can prove that with some big performances over the next couple of weeks before the game at the Emirates Stadium.

And it is great to have Paul Pogba, Marcos Rojo and Zlatan Ibrahimovic back.
Posted by Dav Aulak at 18:52