2017 has already been a spectacular year for Boxing fans, but things might just have reached the pinnacle when Canelo Alvarez faces Gennady Golovkin in Las Vegas in a legitimate 'best versus best' contest that it has been billed as.

This has to be the most anticipated fights of this generation as the two leading Middleweights meet in the centre of the ring.

Across the pond in London we will see the only Middleweight belt that is not on the line in Vegas being fought out between Billy Joe Saunders and Willie Monroe with the winner of that one likely to be matched up with the winner of the Canelo-GGG fight early in 2018. That all depends on the winner of the fight though as Canelo has an immediate rematch clause if he loses, but Golovkin is not going to have the same opportunity, at least not contractually.

The World Boxing Super Series also got underway last week and the first fight in the Super-Middleweight tournament takes place in Liverpool. The Super Series looks set to give us some really good fights in the months ahead until the Finals take place in May 2018 and I am looking forward to a tournament that may introduce new weight classes to this format in 2018 if this tournament and the Cruiserweight one goes as well as expected. 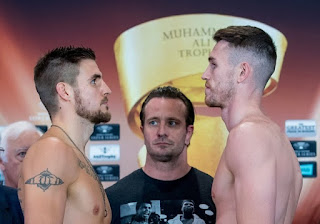 Callum Smith vs Erik Skoglund
The World Boxing Super Series Super-Middleweight tournament really looks a strong line up with only James DeGale missing to make it the perfect eight boxers in the draw as far as I am concerned.

The winner of the tournament is going to be a star and Callum Smith have been tipped up for that position for a number of years. He has been frustrated with a delay in his World Title challenge and it led to him deciding to skip his mandatory position and instead chase World prizes in this tournament where George Groves has brought his title into the mix.

As a 'Seed', Smith got the chance to pick his opponent in the Quarter Final and he also has home advantage with this fight taking place in Liverpool. Smith chose unbeaten Erik Skoglund who has decided to come down from Light-Heavyweight for a chance to enter the Super-Middleweight tournament.

Skoglund is not the bigger man in this one though and his resume is not exactly filled with a lot of recognisable names and I do wonder if the step up to face Smith is one he can handle. His fights have taken place in Sweden and Denmark so this is a huge test of his belief as he travels to an opponent's back yard for a tough opening fight in the tournament.

This isn't an easy fight for Smith either, but I do think he has picked Skoglund knowing he has the size to keep him on the end of the jab and some thudding shots. The Smith resume has just faltered in recent fights as he has waited for his mandatory shot for the WBC Title to materialise, but I still think he has been ticking along at a higher level than Skoglund and I think that will show up in this one.

I do believe Smith will earn the stoppage, but he may have to wait until the second half of the fight as he breaks down Skoglund before ending things. 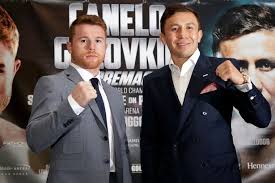 Canelo Alvarez vs Gennady Golovkin
This is the fight all Boxing fans should be looking forward to.

Everyone will have landed in their respective camps and there won't be many sitting on the fence as people voice their opinions on this fight.

Personally I have thought Gennady Golovkin was the man at this weight class and I am not going to shift my mind now as I try and escape the building hype around the biggest fight we have prepared for since Manny Pacquiao took on Floyd Mayweather. That fight was a real anti-climax, but I am not expecting this one to be between two fine fighters who won't need to go looking for the other.

The reason so many seem to have flipped to the Canelo Alvarez side has to have something to do with the last two Triple G fights. Kell Brook had his success and I thought the Daniel Jacobs performance also came close to seeing Golovkin upset, and many think that is the blueprint for how to beat the Kazakhstan war horse.

I think both have been overplayed- Brook had has much success as Amir Khan was having against Canelo before both fighters were eventually stopped, and Jacobs came in much bigger than anticipated and had to pick himself up off the floor in that fight.

This time I think Golovkin will be the bigger fighter in the ring and while Canelo is a very good boxer, keeping GGG off has proven to be difficult. Canelo is not as slick as Daniel Jacobs and I am not sure he has enough power, despite having plenty, to keep Golovkin from coming forward and cutting the ring off.

Canelo is a great counter puncher, but GGG doesn't seem to get fazed and his own thudding power may prove the difference towards the end of this fight. At some point I do think GGG will have his man in trouble and it will be how much Canelo can weather to determine if he can get through this fight.

Earning a decision in Las Vegas against the home fighter is going to be very, very difficult for Golovkin and I do think the only way he wins this is by stoppage. I can see Canelo making the better start, but Golovkin edging more and more into the fight in the second half when he is able to start really applying the pressure on his opponent.

A cumulation of punches is what Golovkin uses to wear down opponents and that has every chance of happening here. This is a fight that is going to be a lot of fun to watch on Saturday evening, but I will stick with my original thought when this fight was announced and that is Golovkin by late stoppage.