I have been largely disappointed with my Boxing Picks in 2019, but it just goes to show it can be a difficult sport to produce a positive return from- there is no point predicting a fighter to win at 1.10 because I am not sure how much profit you are going to end up with when backing such a strong favourite.

It is certainly that much more difficult when you think of the amount of upsets we have seen in Boxing in 2019 and there is a real chance that we are going to see one or two more before the calendar year comes to a close.


On Saturday night we have a big night of Boxing as Callum Smith returns to the ring, while Deontay Wilder completes what we all hope will be the first of two big rematches to take place over the next several months.

I am looking for a strong weekend to get things moving back in a positive direction after the tough few months for the Picks.

Craig Glover vs Chris Billam-Smith
The chief support in Liverpool this evening is a Commonwealth Title bout in the Cruiserweight Division and there is no doubt that Craig Glover is going to have the majority of the support inside the Arena.

Tony Bellew manages Glover, and the Liverpudlian is back in a position to fight for a big Title just months after a shocking defeat in this very Arena.

An early stoppage will have raised some eyebrows and I think Glover is going to be tested very quickly by Chris Billam-Smith who impressed in a narrow defeat to Richard Riakporhe in July. You don't always know how a fighter will respond to a defeat, but Billam-Smith has to believe that his power is going to be enough to rattle the home fighter in this one.

Craig Glover does have some pop himself, but I am not sure he has fought at this level and I would fancy Billam-Smith to have a bit too much for him. At some point we are going to see the chin being tested and I just think Billam-Smith is a step above here.

The home fighter has plenty of pop himself and it could be a very fun fight to enjoy, but I will look for the favoured fighter to find the stoppage at some point in the Twelve Rounds to be competed. 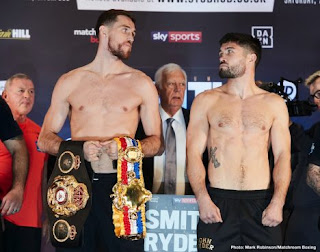 For me Callum Smith is the Number 1 Super Middleweight in the World, but I also think this is a fighter that can't really stay in this Division for too much longer.

Ultimately Smith is chasing some big names to take on with a suspected date in 2020 where he will be headlining Anfield. The problem is that the majority of those are in and around 168 and I am not sure Smith will want to take on one of the top Light Heavyweights in that fight.

Instead you can make an easy case for taking on Chris Eubank Jr or having a Unification with Billy Joe Saunders, although any chance of tempting Canelo to Liverpool looks a long-shot to say the least.

None of that will matter if Smith can't handle the fight in front of him on Saturday when he takes on John Ryder who has won four in a row since losing on a Split Decision to Rocky Fielding. All credit has to be given to The Gorilla for forcing himself into this position to have a crack at the top fighter in his Division, but all of the attributes look to be in favour of the Champion and I can't see anything but an impressive Callum Smith win.

John Ryder has only been stopped once before, but Smith is a very big puncher and could break the heart and spirit before forcing a Stoppage. There are quite a few who believe this could be a very early night for Smith like it was when he crushed Fielding, but I think Ryder will show some resilience before being put away.

Having a small interest in Smith to win this at some point in the middle Rounds looks the call here and I imagine he will then mention the biggest fighters around his weight Division for a fight at Anfield next year. 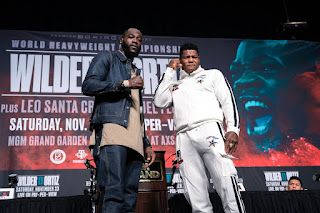 Eighteen months ago Deontay Wilder and Luis Ortiz were involved in one of the best Heavyweight fights in recent years, but it is hard to imagine the rematch reaching that kind of level.

Now the Cuban is that much older and he has not looked like he has recovered his punch resistance since facing Wilder for the first time. I have to credit the shape in which Ortiz has gotten into at the 40 years old he is stated to be (most think Ortiz is older than that), but we can't ignore the fact that Wilder should be stronger having struggled with flu ahead of the first fight.

Deontay Wilder will know he has the power edge in this one and I was of the opinion that this would be a win for the American in fewer Rounds that were needed to win the first time around. I do think he will be a little careful early, but I don't think Wilder is someone who wants to warm into fights and he will look to detonate the big right hand whenever he gets a chance to do that.

This time I think we will see Wilder find the mark around the same time he did in the first fight, but the difference will be that the WBC Champion will not allow Ortiz off the hook. In that initial bout Wilder put Ortiz down in the Fifth Round and I think the play here has to be backing Deontay Wilder to win anywhere between the Fifth and Eighth Round.

There have been some who think this could be another Dominic Breazeale moment, but I think Ortiz will be respected for the first couple of Rounds by Wilder. I do think Wilder will then start motoring through the gears and he can push ahead and find the winning shots at some point through the middle of this Championship Bout as Ortiz perhaps loses his gas tank a bit earlier than eighteen months ago.