In the last few years upsets have been rare in the Divisional Round of the NFL PlayOffs, but there was one major one last week when the Tennessee Titans knocked off the Baltimore Ravens on the road.

The other three home teams all playing off a Bye were winners, but the Titans rolling over Baltimore was a massive upset. Tennessee now go into the AFC Championship Game facing the Number 2 Seed in the Conference with the chance to beat the top three teams on the road as the Number 6 Seed which would be a remarkable achievement.

Winning at Arrowhead Stadium won't be easy, but Tennessee are playing with confidence and that looks an interesting game to open the Championship Games. The second one between the San Francisco 49ers and Green Bay Packers has put the top two Seeds in the NFC on a collision course and this should be a fun day which sets up the Super Bowl contest that will be played in two weeks time. 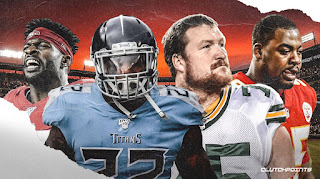 Tennessee Titans @ Kansas City Chiefs Pick: When the NFL PlayOffs began I think most would have been comfortable predicting the Baltimore Ravens and the Kansas City Chiefs would make the AFC Championship Game- while the Chiefs secured their spot, the Baltimore Ravens became the second upset victims of the Tennessee Titans who rolled to a big road win over them in the Divisional Round.

The Number 6 Seeded Titans have already won at the Number 3 Seeded New England Patriots before knocking off the top Seed in the Conference. Winning a third road game against the team that finished in between Baltimore and New England would be a huge achievement for Tennessee, but this is arguably the most difficult of the tests in front of them.

There is no doubt that Baltimore were hot going into the PlayOffs, but Kansas City have looked like the team most rounding into form and I would have been comfortable backing the Chiefs even if they had been travelling to Baltimore. The Defensive unit has picked up their play and it looks like Chris Jones is trending towards playing on Sunday which will give them another boost.

Some might be surprised to read that I believe the Defensive unit have been playing well considering they gave up 31 points to the Houston Texans in the Divisional Round, but that was largely down to a horrific First Quarter when a blocked punt produced one Touchdown and a muffed punt left Houston inside the 10 yard line for another. After the first twenty minutes, Kansas City settled down on that side of the ball and restricted Houston to 7 points over the last forty minutes which shows what they are capable of.

Slowing down Derrick Henry is going to be a major problem for Kansas City with the big Running Back hammering New England and Baltimore and pounding them into submission. All season one of the main problems for the Chiefs has been stopping the run so you have to imagine Henry can have another very big game, although the key requirement for the team is making sure they don't allow Kansas City to build a big lead and force them to have to take to the air.

Ryan Tannehill has found a new lease of life with the Tennessee Titans having arrived from the Miami Dolphins prior to the season beginning and starting out as the backup to Marcus Mariota. Since Tannehill has come in, the Titans have been flying, although he has not been asked to do too much during this strong run that has taken them to the AFC Championship Game.

While there are one or two holes in the Kansas City Secondary which have been hit by teams as they chase the comeback, the Titans won't want to rely on the Tannehill arm in what could be cold and windy conditions at Arrowhead.

Those conditions may actually work to Tennessee's favour for the most part, especially if it is as gusty as some have suggested it is going to be. It might make it a little tougher for Patrick Mahomes and the Chiefs to sling the ball around as they did last week when scoring Touchdowns on seven consecutive possessions which turned the Divisional Round Game right around.

Even then you wouldn't really back against Mahomes having another big showing and his threat has opened things up in the running game too. Damien Williams played a huge part in the success over the Houston Texans and he could find a few more running lanes against the Titans who will have to be wary of the ability of Mahomes to make plays when scrambling for First Downs himself.

Patrick Mahomes has been well protected by his Offensive Line too so he should have time to find Receivers down the field against a Tennessee Secondary which has not been able to stop teams from throwing against them. Where the Titans have had successes is by winning the turnover battle in the last couple of games, but Mahomes is not likely to make big mistakes and it only took some big drops to stop the Chiefs moving the chains last weekend.

Tennessee did win the regular season meeting between these teams, but Patrick Mahomes was not at full health back then and even then the Chiefs were a missed Field Goal from moving Overtime. You do have to respect the Titans and the way they have some momentum behind them, while stopping Derrick Henry might be next to impossible outside of moving a couple of scores clear and forcing the Titans to have to rely on Ryan Tannehill instead.

Colder conditions do make those teams who run the ball that much more dangerous, but Kansas City look better balanced and I do think they have been peaking at just the right time. Teams who have won the regular season game and then rematched in the PlayOff Championship Game do have a lot more success than failure so the Titans will feel confident, but I think Kansas City might have too much scoring for their team.

There are some major trends that go against Kansas City from a historical perspective as teams who score 39 or more points in a PlayOff Game have struggled to cover in their next one. The Titans have been dominant on the ground and if they can keep things close early they will have a chance, but I think Patrick Mahomes and the Kansas City Chiefs will have learned a lot from their AFC Championship Game loss from last season and they will start faster this time around.

If they can do that the Chiefs should have just enough to edge to the win and the cover in this one.

You can see why so many would favour the 49ers who have home advantage and looked to be in fine form when crushing the Minnesota Vikings in the Divisional Round. They have also had one extra day to rest and prepare for this game and I do think that could play a part when it comes down the stretch, and that makes it very important for the Green Bay Packers to make a much better start than when these teams first met.

The Packers were down 23-0 at half time that day, but they have won six in a row since then and they have to be feeling pretty good with the way they handled the Seattle Seahawks last week. Aaron Rodgers had one of his more productive days of the season and the Packers are going to need him to be at his best having been stymied in the regular season meeting against this Defensive unit.

Aaron Rodgers found himself under significant pressure throughout that one, but part of the reason was the inability to get much going on the ground. The other Aaron, Jones, has been playing pretty well behind a healthier Offensive Line in recent games although Dalvin Cook got next to nothing out of this San Francisco Defensive Line last week and so it might be another tough outing for the Running Back. Instead he might be a threat catching balls out of the backfield to try and loosen up things for the run, while I do think Rodgers will come out throwing as long as it is not towards Richard Sherman.

Davante Adams will be able to make plays lined in different places, but Green Bay will need someone else to step up to ease the pressure on them. The Offensive Line also have to show they have learnt something from their blow out loss in Week 12 when Aaron Rodgers was Sacked five times and under pressure throughout.

While I do think the Packers will be better Offensively than they were in the loss in Week 12, the real challenge for them is going to be on the Defensive Line and working out how to have an impact on the San Francisco rushing numbers. No matter who gets the ball for the 49ers the system has been designed to put a lot of cloak and mirrors around what they are doing and it has seen San Francisco pound teams into submission.

In the win over the Vikings, the 49ers were ripping off chunks on the ground and breaking the heart of the visitors and stopping the run has been the one big weakness of the Green Bay Packers. They have to find a way to at least make Jimmy Garoppolo have to throw from third and long spots, although the Quarter Back had a solid enough showing when he was asked to do that by the Vikings too.

Jimmy Garoppolo is more than a game manager, but he is playing behind an Offensive Line which has struggled in pass protection. Running the ball effectively opens things up for the Quarter Back, but if the Packers can find a way to get into position to unleash the 'Smith Brothers' then it could be a tough afternoon for Garoppolo.

He did have a very good performance in the Week 12 blow out of the Packers so Garoppolo should have confidence, but the Green Bay Secondary has played well enough to believe they can be much better this time too. I still expect the 49ers to have plenty of Offensive success in the game, but Green Bay should avoid the blow out and getting more than a Touchdown start with the road team is appealing.

Green Bay have a 3-1 record against the spread as the underdog this season, although the one loss was to the 49ers when given 3.5 points in Week 12. The 9-2 record of teams who won the regular season game by 21 points and then rematching in the Championship Game is a concern for the Packers, but those teams who have been blown out have recovered to be more competitive of late.

In fact those teams who have lost by 14 or more points in the regular season are 4-1 against the spread in the Championship Game rematch in the last five games we have seen that happen. I do think Aaron Rodgers and company will have learned plenty from the Week 12 blow out and I expect them to keep this one much closer so will take the points with the Super Bowl winning Quarter Back.