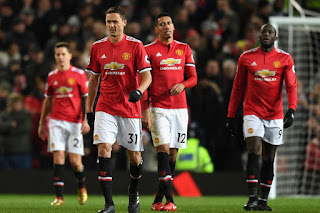 United Corner- Derby Day Disappointment (December 13th 2017)
The reality is that most of us Manchester United fans would have accepted that Manchester City have the superior eleven starting at the moment, but that doesn't mean we have to accept being second best as we were at Old Trafford on Sunday.

It has taken a couple of days for the defeat to really sink in and the stories of the tunnel fracas and subsequent press conferences both Jose Mourinho and Pep Guardiola has kept the wound a little fresher than I was hoping.

The thing that really grates is that, despite being second best, and despite the feeling United are not as good as City at this moment in time, United should not have lost in the manner they did. Two horrible mistakes from set pieces and the game was gone, but looking back it was only when United began to chase the game that City really had the openings to put the game away and I can't think of too many great chances created before that.

But I am saying that City were mainly kept at arm's length and those two mistakes from set pieces are haunting me in a game where I feel United could have got a result.

Even with that in mind, there are clearly some way to go before United can really match those lot across the way and I think the next summer transfer window is going to be a really big one for Jose Mourinho. A legitimate number 10 and another wide player have to be the priority, but it can't just be a functioning player but one that can really turn a game.

That would seriously help with the maintaining of possession against a City team who try and starve teams of the ball, while also providing a more effective counter attack.

Some of the tactics may need to be questioned with the long, direct ball clearly not working bar one mistake from the City defence, but that can be a decent plan if mixed in with a little more courage to take the ball down and get around the press.

It can happen and that extra quality will help, while I still believe Paul Pogba was a huge loss for the team and one that may have turned enough in our favour to get something from the game.

This season it is tough to get the ball down and play when you see some of the starters from Sunday, but I do hope the entire team plays with a little more belief in what they are doing the next time we meet City.

That might not be too long with both clubs progressing in the League Cup which reaches its Semi Final Round after the Quarter Finals are played next week. Both United and City also have decent Champions League draws and a chance to open up in the FA Cup with home wins so there is every chance we have to meet again to determine more silverware later in the campaign.

A bit more bravery and a better performance from set pieces and I think United will be closer, especially as City begin to rack up the games and the fatigue later in the season.

Some of that will depend on the title rivals getting closer than the 11 point gap which currently exists. I think United just have to do what Mourinho has been emphasising and that is take each fixture as it comes and see how it plays out.

Games against Bournemouth, West Brom, Leicester City, Burnley (twice), Southampton, Everton and Stoke City represent a good chance for Manchester United to get back on the horse and see where they stand when they head to Wembley Stadium to play Tottenham Hotspur at the end of January.

It is very much within the realms of possibility that United can win all 8 game League games in that time during which Manchester City host Tottenham Hotspur and have to visit Liverpool and suddenly the gap may look more manageable.

I am clutching at straws somewhat, but we have seen United both reel in and blow big leads after Christmas in the last twenty years and I don't want to be handing any prizes to City just yet.

It was also nice to hear from Louis Van Gaal in the aftermath of the loss to Manchester City- a good time for the overrated Dutchman to try and stick the knife in.

Unfortunately the suggestion that his United team were the 'great entertainers' went down faster than a lead balloon, while the fact he thinks he has his 'best year' as manager, despite the money he was handed, is laughable.

One, I've never been as bored watching United as I was under LVG when goalless home draws were the absolute norm as he put spectators and his own players to sleep.

We also lost 4-0 at MK Dons in the League Cup and a home loss at Arsenal meant United ended up without silverware.

The next season the great LVG couldn't get United back into the top four.

Best year? He honestly must have been at the Christmas wine again.

And every day he should thank a broken fax machine for being the reason his only real legacy at Old Trafford would have been selling David De Gea to Real Madrid for Keyler Navas and a bag of crisps!

The fixtures will come thick and fast during the remainder of December with United playing twice a week and that could continue through January depending on whether we get through to the League Cup Semi Final and any potential FA Cup Replay.

It's a tough time but Pogba is back next week and the squad has the depth to cope with the fixtures. I am hoping United can kick on with the wins to really put the Manchester derby defeat behind us and I am sure there is enough character in the squad to do that.

There is plenty of football and silverware to be played for and Sunday is not going to hold back the team. United can't afford to slip up though with the top four chase looking like one that could go down to the wire, but I believe the boys will get back to winning ways on Wednesday and that will help build some momentum to take into the new calendar year.
Posted by Dav Aulak at 18:04