The first weekend of the NFL PlayOffs did not let anyone down even though expectations had been raised by some of the performances of teams ...

Two weeks ago the 2017 Boxing year got off to a huge start with a really good fight between Badou Jack and James Degale and it is a shame we won't get to see that again. The draw does mean Degale can move onto some big domestic fights with the likes of Callum Smith and George Groves and both of those British fighters could have their own World titles to set up big unification fights.

We also saw the start of the Gervonta Davis era as Tank dominated Jose Pedraza before knocking out the former World Champion in the second half of the fight. While Davis is going to be avoiding the likes of Vasyl Lomachenko in the near future, he can start his build towards becoming a big PPV draw with Floyd Mayweather guiding his career.

The big fights continue in January as we get to see Carl Frampton versus Leo Santa Cruz 2 after a classic fight in 2016. This fight is taking place in the early hours of the morning as it will be coming from Las Vegas and it looks a decent undercard too.

However I have to feel sorry for Lee Selby whose own fight in Vegas was cancelled due to his opponent failing to be given a medical license for the event before the weigh-in was expected to take place. 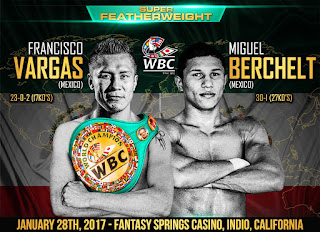 Francisco Vargas vs Miguel Berchelt
Whenever two Mexican fighters are in the ring with one another you have to expect there are going to be moments when both want to stand and trade with each other. That should definitely be the case when two bangers like Francisco Vargas and Miguel Berchelt meet for the WBS Super Featherweight title on Saturday.

Most of the eyes of the boxing world will be on the rematch between Carl Frampton and Leo Santa Cruz in Las Vegas, but this could be a 'Fight of the Year' contender if Berchelt is as good as advertised.

27 of Berchelt's 30 wins have come by Knock Out and none of his nine previous opponents have managed to get past the Sixth Round since Berchelt's sole loss. He will test Vargas and we will all get to see whether the two huge fights the Champion has had back to back has taken something out of the tank.

Many times in the past these fighters who have become embroiled in too many wars are in danger of having left something in the ring and what was once a pretty tough and granite body and chin just can't take the same punishment as previously. Vargas took some huge shots in his last two fights and I do think he will need to weather the storm that Berchelt will bring into the ring as he tries to establish his own power.

This certainly looks like the kind of fight that steals all of the headlines on a busy Saturday where there are three big fights slated. I have to say I still think Vargas has still got something to offer and he can box his way through the first half of the fight and show off some big power shots of his own as he tries to get a feel for what Berchelt is bringing.

At some point a firefight is going to develop between these two and I am looking for Vargas to get the better of those exchanges. He might need to get off the floor to turn this one around, but I am going to have a small interest on the Champion earning a stoppage in the second half of the fight at a big price. 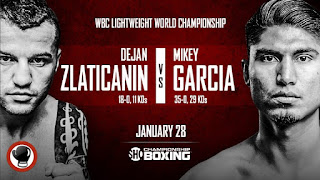 Dejan Zlaticanin vs Mikey Garcia
Mikey Garcia might only have had one fight in two years, but this looks like the year in which he gets his career moving forward having been stalled by out of the ring issues and injuries. He is the favourite to win the WBC World Lightweight title on Saturday on the undercard of the Carl Frampton-Leo Santa Cruz bill, but Garcia will do well not to overlook Dejan Zlaticanin.

British fight fans should know all about Zlaticanin who upset Ricky Burns as a big underdog which was helped by a huge First Round knock down in the fight. Burns was the better fighter from there, but Zlaticanin is a dangerous southpaw and will pose some problems for Garcia.

The Serbian has a big punch but Garcia should be the better boxer once he figures out a few things early in the fight. There is no doubting the power that Garcia possesses and he looks to be carrying that up to the Lightweight limit and I expect that to be a difference maker in the second half of the fight.

Zlaticanin is tough and he won't be easy to put away, but Garcia is a heavy puncher who puts his combinations together and that can wear down the most granite of men. Garcia definitely looks like he is carrying his punch up a weight after demolishing Elio Rojas in five Rounds even if Rojos is not the fighter he was.

I simply can't see Garcia being able to get Zlaticanin out early as he will be cautious to test the power of his opponent in the first couple of Rounds. I do think Garcia's punches will become more telling as the fight continues and I am looking for him to take Zlaticanin's '0' with a stoppage in the second half of the fight. 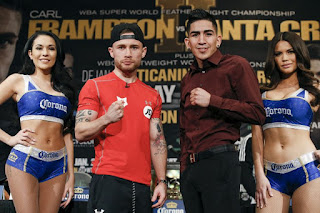 Carl Frampton vs Leo Santa Cruz
Anyone who saw the first fight between Carl Frampton and Leo Santa Cruz must be licking their lips with anticipation for another barnstormer between two fighters who have plenty of pride and wear their hearts on their sleeves. It was Frampton who came away with a deserved decision in Brooklyn although the quality of the Rounds fought made it a close decision.

I expect Frampton to make a few more improvements in this one than Santa Cruz and even the expected home advantage of fighting in Las Vegas won't really be there for the Mexican with plenty of Northern Irish fans heading over to see their hero.

Santa Cruz does have the height and reach advantage over Frampton and has been suggesting he will box a lot more than brawl in this one, but I say a leopard can't change his spots. Especially not after a few months.

That means Santa Cruz will likely press forward to engage Frampton, but the latter has shown he is able to make adjustments and fight when he wants and box when he wants, even on the back foot. I expect the game plan will be to box more than he did in Brooklyn so Frampton can earn a clearer decision on the cards and not jeopardise potential huge fights further down the line.

I don't think he will stop Santa Cruz so backing Frampton to earn another decision win over the former Champion is the call.