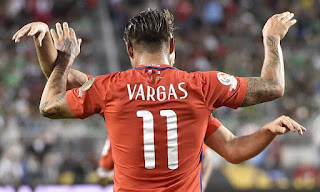 Copa America 2016 Semi Final Picks
The Copa America tournament is coming to a close in the next few days and by the end of Wednesday we will know which two teams will be competing for the trophy on Sunday.

The favourites to do that are Argentina and Chile, the Finalists from the 2015 edition of the tournament, but both the United States and Colombia are sure to have a lot to say about that.

It has been a very good tournament to date, even if most in Europe are perhaps missing a lot of the games due to broadcasting rights on a subscription channel or the Euro 2016 tournament taking up the attention. That shouldn't detract from what has been a good display of attacking football for the most part and the goals have been flowing at a regular rate.

The main talking point out of the Quarter Finals have to be the United States achieving their goal of reaching the Semi Final and Chile's total dismantling of Mexico in their 7-0 win.

Only Colombia failed to win in the ninety minutes, but these matches go straight to penalties before the Final so I am not anticipating fatigue being a big issue for them. Instead I am looking forward to what should be two very good Semi Final games heading into the final two games of the tournament which will be played this weekend.

Tuesday 21st June
United States v Argentina Pick: The two Copa America Semi Finals look like they could provide some fireworks this week and the first between the United States and Argentina will pull in some big viewing numbers. The hosts USA have really taken to the Copa America so it is no surprise that there have been some suggestions they could become a permanent host of the event, and the side have not failed to impress on the field.

The 0-2 defeat to to Colombia looks long forgotten as the United States have won 3 straight games including impressing against Paraguay and Ecuador. Of course this has to be considered a test along the lines of what Colombia provided as Argentina will be bringing in a team that has scored plenty of goals in their four wins here.

Games between the nations have been tight the last couple of times, but those were international friendly games and the last of those came back in 2011.

Now the United States have to show they can contain Argentina as they will be put under pressure for long periods. The Venezuela Quarter Final would have encouraged the United States that if they can defend well, they will have chances against this Argentina backline and Jurgen Klinsmann has a chance to become a national here in his adopted country if he can lead the USA to the Final.

That just looks a big ask for me and I think Argentina are scoring too many goals for the United States to really look to contain them. I expect this to be competitive, but I can see a situation where a late Argentina break finishes off the Semi Final.

The Argentina defence does look vulnerable at times, but the attacking talent more than make up for that and I think Argentina win this by the same margin as Colombia did over the United States in the opening game of the tournament. The United States may have an impact in the scoreboard in this one, but Argentina to win by a couple of goals is my pick.


Wednesday 22nd June
Colombia v Chile Pick: The first Semi Final between the United States and Argentina will be played the day before this one, but Chile are favoured to make it a repeat of the 2015 Copa America Final.

That looks a big reaction to the 7-0 thumping of Mexico in the Quarter Final as Chile look to be rounding into form at just the right time, but Colombia might be another step up in competition.

There is a fear that Colombia might have peaked too early with an impressive win over the United States to open the tournament, but I wouldn't read too much into the goalless draw with Peru or the defeat to Costa Rica. Peru showed little desire to come out and play football, but Colombia were still unfortunate not to win that one in normal time, while the defeat to Costa Rica came against a second string Colombia team.

Colombia will find more space against Chile whose intention is to get forward and score goals and I can't see how these teams don't create chances against one another. Penalties will decide the winner if this match is tied after ninety minutes, but I can't see either side settling for that and I am looking for an attacking display from both Chile and Colombia.