The card from the Staples Center a week ago did not disappoint with Errol Spence Jr and Shawn Porter getting into a fantastic fight to headline the whole show.

They both showed they are amongst the best in the Welterweight Division and I am not going to be one of those who is down on Spence Jr for what was perhaps a tougher fight than he would have expected. Anyone who has watched Porter down the years should know what this man brings to the table and all credit to Porter for making Spence Jr have to dig in to find some reserves that he has yet to really display in a strong career.

My only personal disappointment on the evening was the arrival of Danny Garcia which suggests he is the next fight that Errol Spence Jr will be taking in January. We have seen some solid wins over Garcia down the years, but I am not sure he is good enough to compete with Spence Jr and the bouts with Manny Pacquiao and Terence Crawford, the two other belt holders in this Division, look to have been pushed back at least six months.

That is a shame for the fans, but the Welterweight Division is loaded and I would not be disappointed if Shawn Porter was able to land the shot with Crawford. The future for Manny Pacquiao is much harder to work out as his team look to negotiate his last few fights, but it can only be a matter of time before he has to put his World Title on the line against someone like Errol Spence Jr considering both are under the same promotional banner.


We will see those issues hopefully clearing up as some of the early 2020 scheduled fights begin to be announced in the next few weeks.

There are plenty of big nights to appreciate before then though and this weekend it is the return of Gennady Golovkin as he looks to pick up the IBF World Title which has been dropped by Canelo Alvarez. It feels like we are still some way away from seeing the third fight between Golovkin and Canelo, but picking up a World Title will give Golovkin something to bring to the table, although he should not be overlooking this opponent.

I will get onto my selection from that fight below.


Before then just a quick word on the Boxing Picks which ended with a 2-2 record last weekend but with a very strong, profitable return. That has just pushed the 2019 totals into a better position, but I am still looking for a better win-loss record to really improve the results.

This weekend there is only one fight that interests me in terms of a Boxing Pick and that is the main event involving GGG. 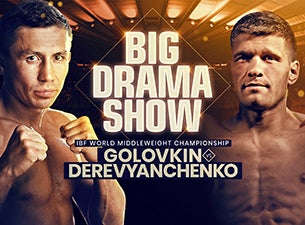 Gennady Golovkin vs Sergiy Derevyanchenko
When DAZN offered Gennady Golovkin a huge chunk of money the reasoning was that a third fight with Canelo Alvarez would give them a huge return.

However it has not been the case because Canelo refuses to play ball with his TV network and instead continues to insist that his time sharing a ring with Golovkin is over.

Canelo seems to be chasing some legacy defining fights at the moment and is going up two weight Divisions to take on a legitimate Light Heavyweight Champion in Sergey Kovalev early next month. You can't say Canelo is taking an easy option, but the IBF wanted their Middleweight Title defended yet and Canelo's refusal means the World Title became vacant.

That is where Golovkin was happy to step in and take on Sergiy Derevyanchenko who has come up short once before when going for this World Title. He was beaten by Daniel Jacobs in a very tight fight that was determined by an early Knock Down that cost Derevyanchenko the chance to take on Canelo Alvarez himself earlier this year.

Sergiy Derevyanchenko has only had the one fight in almost twelve months since taking on Jacobs and this is a fighter with a lot of miles on the clock thanks to an extensive amateur career. A 13-1 record as a Professional won't make that clear, but there is some school of thought that Derevyanchenko has seen his best days despite the handy win over Jack Culcay last time out.

He doesn't have the power that Golovkin clearly brings into the ring, but you do have to wonder how much the fighter from Kazakhstan has left in the tank. Those two huge battles with Canelo Alvarez would take something away from a fighter of any age, but Golovkin is 37 years old now and will have to be close to his best if he is going to win a fight like this one.

Ultimately I can see the first few Rounds being very competitive with Derevyanchenko perhaps not going hell for leather with Golovkin until the second half of the fight. Before then I think the Ukrainian will want to pop his shots and make sure he is not dragged into a firefight with someone who looks to have a considerable bigger punch.

We have seen some vulnerabilities in the Derevyanchenko whiskers in the last couple of fights and I do think Golovkin may end up getting to him, although not in the first half of the bout. I expect the early stages to be a time when Golovkin just works out what Derevyanchenko has left and the Ukrainian will likely be looking to move and make sure he is not trapped.

My feeling is that Golovkin's strength will end up making the difference and he should be able to put something together in the second half of the fight to earn the win inside the distance. He still possesses power, although the question remains about how much Golovkin has left having not really been involved in too many big fights since the second loss to Canelo last year.

I do worry about the punch resistance that Derevyanchenko has though and I am going to look for GGG to win this one somewhere between the 7th and 12th.